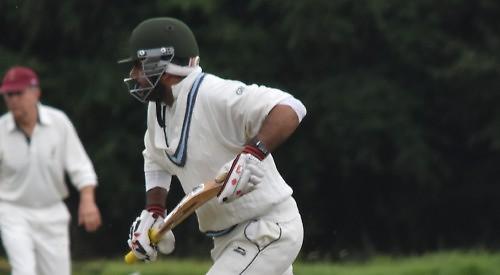 PEPPARD STOKE ROW UNCIORNS’ Abingdon School contingent helped fire their side to a four-wicket triumph at home to WOODPECKERS.

Opening bowler Tom Owen claimed 2-7 in a five-over spell which put the away side on the ropes, and despite something of a fightback through Richard Ashton (31), who guested for the away side, and Henry Glaister, they could never get on the front foot.

Ben Darling top scored with 32, but Owen’s fellow Abingdonians Owen Ravden (2-27) and Will Wakelam (3-19) worked their way through the lower order as the Woodpeckers were dismissed for 148, Unicorns skipper Andy Watts claiming four catches in contrast to his usual efforts in the field.

Daniel Watts made 21 as he closed in on 1,000 runs for the season at the top of the Peppard reply, but a middle-order collapse left them wobbling on 68-5 and further inconvenienced by Wakelam having to retire hurt when he was struck at the non-strikers’ end by a vicious Scott Harris drive.

However, Ravden (34) and Harris (37 not out) steadied the ship before Owen (22 not out) capped a fine all-round display by hitting the winning runs during a hard-hitting cameo.

U15 Harry Harper returned impressive figures of 3-43 for PEPPARD STOKE ROW MAHARAJAHS, but they were defeated by 79 runs at SONNING.

Nick Murdoch and Aled Roberts also grabbed a wicket apiece as the hosts posted 229-5 from their 35 overs, and despite captain Mark Lambert blasting 31 from only 16 balls in reply, Pepaprd were ultimately dismissed for 150.

Jacob Lamsdale’s outstanding display with the ball eventually proved in vain as PEPPAPRD STOKE ROW PANDAS slipped to a narrow four-run defeat to THAMES DITTON at the Les Clark Oval.

Connor Lamsdale (59) seemed to have the Pandas on track for victory, but after he departed, the lower-order could not quite fashion the required rate and they were eventually kept to 162-7 in reply.

Father and son Lyn and Hugh Williams gave WHITCHURCH the ideal start at CHECKENDON with a 132 run opening partnership in 25 overs.

A number of fine catches from the home team helped keep them in check during the later stages yet the visitors still posted a daunting 234-6.

Not be outdone, Jim Warrne made 105 in 109 deliveries and Matt Heslop 81 at a run a ball as they put on 175 for Checkendon’s first wicket.

Even the loss of three batsmen in quick succession could not halt their progress as skipper Sam Arrowsmith then smoothly levered three sixes way over the midwicket boundary on his way to 41 in 19 balls, securing victory for his team by five wickets and bringing the runs total for the day to 471 in 76 overs.

GREYS GREEN ran out comfortable winners in their home clash with SWYNCOMBE.

Greys lost the toss and were asked to bat by the visitors. Shafqat and Ahmed were able to score steadily while seeing off the new ball. Both batmen soon became well set scoring more freely despite the best efforts of the visiting attack. For Swyncombe, when the chances came they were missed and both openers capitalised, putting on an opening stand of 200 before both retiring not out.

Ahmed hit a fluent 115 with a combination of strong cuts and assertive front foot drives while Shafqat was watchful and played well off his pads when bowlers strayed down the legside to score 68.

Swyncombe stuck to their task and started to take wickets in the final throws of the innings. R Ellis took three quick wickets at the end of the innings. Greys closed on 241-3.

Faced with a daunting total Swyncombe started with intent, I Hunt rotating the strike while T Crockett set about the Greys attack with several lusty blows. His quick start looked promising but a steepling top edge off the bowling of Jenkins saw their best chance of chasing the total disappear.

From that point on wickets fell at regular intervals due to tight bowling from Cross and a fiery spell from Jenkins 5-17 ripped the heart of out the order. Jenkins bowled with guile and variation to secure his five-wicket haul for the club.

Greys changed the bowling and introduced Asrani and young colt player H Shafqat who mopped up the remaining wickets in tandem. Asrani ending with impressive figures of 4-7.

The last game of the season at Shepherds Lane saw HURLEY record a victory against WHITE WALTHAM. Home skipper Mo Basharat won the toss and opted to bowl first. The opening partnership of Harvey Grout and Rahul Mohindru posted 44 in nine overs before Mohindru (12) sliced Hamzah Zaman to Joban Singh at gully.

Only another six runs were added before Zaman bowled Shaoib Usmani (five). Parvinder Hunjan replaced Basharat at the Shepherds Lane end and came in for some punishment as he failed to find any consistency, but Hunjan eventually got going and a triple wicket maiden saw the visitors collapse to 89-6 in the 19th over.

Despite the carnage going on around him, Harvey Grout stuck to his task to make an unbeaten century. Imran Karim (57) joined Grout in a seventh wicket partnership of 71 to ensure White Waltham posted a competitive total of 228-8 from their allocation of 40 overs.

Hurley’s youthful top three with a combined age of less than 50 all made useful contributions.

Hassan Gul (38) and Haider-Ali Baig (19) posted an opening stand of 64 in 16 overs before both falling in the same over.

Archie Wild continued his good form with a classy half century as he and Mubashir Nabi (26) added 58 for the third wicket.

When Nabi was unlucky to be stumped by a rebound off Usmani’s pads, the game was in the balance with the required rate edging towards seven per over.

Mandeep Singh entered the fray and proceeded to put the result beyond doubt with a blistering 65 from 32 deliveries. By the time Mandeep and Wild departed, only 15 more runs were needed from the last five overs.

Hunjan (six not out) and Naeem Akhtar (12 not out) saw their side home with over three overs to spare as Akhtar finished the match off with a maximum.