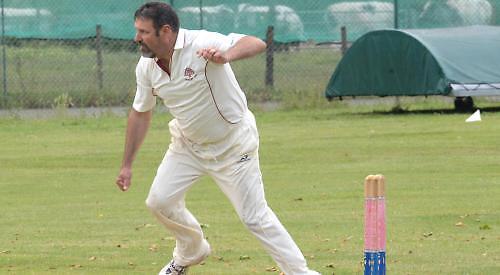 PEPPARD STOKE ROW crashed to a seven-wicket reverse in their friendly against PURLEY.

Having won the toss and chosen to bat, the visitors never really got going as they were knocked over for just 113, Dom Evans top scoring with 34.

And despite Connor Lamsdale, skipper Ruaridh Scott and Mick Chard claiming a wicket apiece, Purley had no trouble racing to 116-3 in just 18.3 overs, Tejpal Singh (38) and Amit Nikumbh (35) blasting their side to a comfortable success.

CHECKENDON were asked to bat by hosts OXFORD DOWNS and reached 213-7 in their 40 overs thanks to opener Tommy Eliss who hit 104 in 110 balls including a six and 15 fours.

Legspinner Kalan was the pick of the home bowlers, finishing with 3-40 in eight overs.

Daryl Woods and Liam Turnbull then put on 82 for the first wicket in reply. However, Checkendon held their nerve in the field, scoring two direct hit run outs as the Downs were restricted to 198-7 at the close, a winning margin of 15 runs.

HURLEY’S recent winning run was brought to and end with a defeat by the narrowest of margins in a thrilling match against WOOBURN NARKOVIANS that went to the last ball with all three results possible.

The visitors were invited to bat first and got off to a good start despite the early loss of Saeed Bhukari, bowled by Akhtar via inside edge and pad.

Paul Cooper (17) and Tommy Wright (70) consolidated with a partnership of 30 for the second wicket. Mandeep Singh replaced Joban Singh at the River End and struck in his first over, having Cooper caught at cover by Josh Cole.

Singh followed up with the wicket of Lemon (10) to reduce the visitors to 59-3 after 14 overs. Wright continued to impress with an array of boundaries and just as it looked like a big total would be posted, the introduction of Phil Ridgeway proved to be a turning point.

The left arm spinner’s second delivery was chipped back to the bowler by Wright and held onto. John Henry Kelly was out lbw to Joban and two more wickets in an over from Ridgeway helped put the brakes on the run rate.

Kevin Dolan made three runs before chipping Liam Cole to the bowler’s brother at mid-wicket. Akash Singh produced an accurate throw to run out Richie Barker and the returning Akhtar finished off the innings in the penultimate over with a yorker to dismiss Ben Cooper.

Chasing 183 at just over 4.5 runs per over should not have posed a difficult task for a strong Hurley batting line up and everything looked good as they progressed to 42 without loss after eight overs, with Kelvin Baillie (42) doing most of the scoring.

The introduction of Richie Barker to the attack put the brakes on with Clive Williams struggling to get the ball away. Eventually the frustration told on Baillie and it was Lemon who was the beneficiary. Williams was put out of his misery three overs later.

At 70-2 with Akhtar and Akash Singh at the crease the situation was still in control for Hurley, but the middle order failed to capitalise, and the hosts found themselves needing 34 to win from the last six overs with only two wickets in hand.

Joban Singh (18) and Mike Walton (17) got the score up to 170 in the thirty-ninth over and in attempting a second run to get Singh back on strike, Singh was run out by a direct hit from long on.

This left Hurley needing 14 to win from the last over, which skipper Cooper put the responsibility on himself to bowl, with the last pair at the wicket. The first delivery was a high full toss which Walton pulled square for two. Another two off the t ball followed by a single brought number 11 Liam Cole on strike with eight needed from four balls.

A couple of singles and a wide followed by a two left Cole needing three to win from the last delivery. Cole played a well-timed shot to mid-on and as the batsmen came back for a second run which would have tied the scores, the throw to the bowler’s end was accurate enough to leave Walton well short of his ground and give the visitors victory by one run.