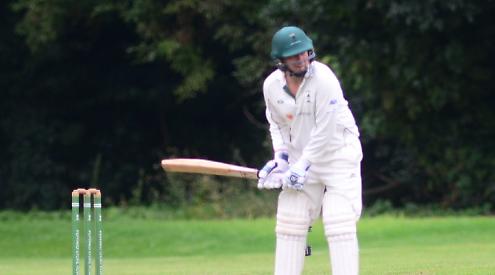 TEENAGER Kyle Tappan made his best PEPPARD STOKE ROW score with a fine 84 to lead his side to a 47-run victory at HOLMER GREEN in their final warm-up game on Saturday.

Having won the Berks, Chilterns and Mid Bucks League Championship last season, Peppard will enter Division 4A of the Thames Valley League for the first time at Purley tomorrow (Saturday), and with Tappan leading the way, they managed to overcome one of their opponents from the previous campaign.

Veteran Andy Watts was also in fine form as he retired at the top of the order having made 50 from 68 balls, while Tappan’s knock featured 16 boundaries in 88 balls before he was edged Dan Little behind.

However, off-season signing Kirk Graham also caught the eye with a quick-fire 47 from 43 deliveries, helping Peppard total 228-5 from their 40 overs.

Sam Fooks made an early breakthrough as the returning Fergus Nutt held on to a catch to account for Deep Purkaystha, but Kashif Iqbal (88) and Dipanjan Basu (43) shared a 129-run second-wicket stand to keep the hosts well in contention.

However, as has happened so often before, the lightning glovework of Michael Chard proved key, the wicket-keeper stumping the pair off the bowling of Graham and skipper Dan Hayden respectively to turn the tide in favour of Peppard.

James Nicholas and Jordan Day both remained unbeaten at the end of the innings, but they gradually fell further and further behind the required rate as Holmer Green were held to 181-3.

Youngster Rudi Derbyshire and PEPPARD STOKE ROW 2nds’ friendly captain Matt Kimber took the bowling honours in their friendly against FRIENDS UNITED on Saturday, but the away side ultimately proved far too strong in securing a 121-run victory.

Amit Mangi top scored with 76 for the Londoners as they posted an impressive 274-9 in their 40 overs, U14 Derbyshire claiming 3-41 and his more venerable leader bagging 3-37 during a second good performance in a row from the left-arm slow bowler.

It was another U14, Adi Hector, who was the stand-out Peppard batsman as he made an impressive 38, hinting at major potential for the future during a knock which showcased class all around the wicket.

Derbyshire also chipped in with an unbeaten 29 and Mark Lambert walloped 21 late on, but the hosts were eventually dismissed for 153.

WOODCOTE captain James Worsfold carried on where he left off when leading his side to the Berkshire League Premier Division title last summer, starring with bat and ball as his side defeated PEPPARD STOKE ROW UNICORNS by two wickets in a friendly on Sunday.

The home side came flying out of the blocks as Mark Harper (46) and U16 Nick Murdoch (52) looked in good touch, but the introduction of Worsfold (3-13 from four overs), along with a tidy second spell from Simon Fitzgerald (2-29), kept the Unicorns to 158-6 from their 35 overs.

Another of the hosts’ increasingly encouraging youth production line, U15 Ben Rumble (3-24), grabbed three early wickets to pull Peppard back into the contest, and with Sam Heritage taking a fine 2-19 in his seven-over spell, the game remained in the balance.

Opener Scott Gore showed his class 51, though, and Alec Curtis, was able to join Worsfold in helping seal the deal. The captain’s quick-fire 18 helped tilt the momentum in favour of Woodcote, but it was the calm head of debutant Curtis (31 not out) — who had also looked handy with the ball — aided by Stefan Gordon, who led their side home with 10 balls to spare.

Opener Rob Simmons made a well-crafted 42 for PEPPARD STOKE ROW PANDAS, but there was little else for the home side to enjoy as they were crushed by eight wickets by CROWTHORNE AND CROWN WOOD on Bank Holiday Monday.

No other Pandas bastman surpassed 20 as they could only muster 116-9 in their 35 overs, and despite encouraging spells from Rob Dyer, on his first outing of the season, and U14 Ben Bridge — who dismissed the visitors first team captain Will Avrili with his first delivery in adult cricket this season — Crowthorne cruised home with more than seven overs to spare.