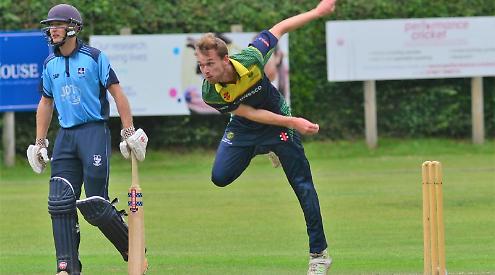 HENLEY Cricket Club’s new captain Tom Nugent says his side will be taking things one match at a time as they aim to win back the Home Counties Premier League Division 1 title.

The Brakspear Ground side won the title three successive years from 2017 to 2019 before the Covid pandemic resulted in the 2020 campaign being cancelled.

Right arm fast bowler Nugent, 27, was appointed skipper after Michael Roberts stepped down after six years in charge of the side at the end of last season.

Tomorrow (Saturday, 11.30am) Henley start their new league campaign at home to Oxford before travelling to High Wycombe the following weekend.

Looking ahead to the new season and the main challengers to Henley this season, Nugent said: “High Wycombe are always a tough opposition, but I think it will be a tough league this year.

“There is a large Berkshire contingent at Wokingham who will be a strong side, and newly-promoted Slough will always be tough competitors now they are back in the league too.

“I think a few of the teams have done some good recruiting over the winter, so there will be a lot of tough games. We will take every game we play one by one and try and build up some momentum.”

Henley have added leg spinning all-rounder Shaariq Sheikh to their side this season. Sheikh, who has played for Berkshire over the last couple of seasons, has joined the club from Middlesex league side Eastcote.

However, Henley will be without the services of Tom Scriven and Euan Woods this time around. Scriven has signed a professional contract with Leicestershire whilst Woods has made the short move back to his former club Wargrave.

Speaking of his squad, which still includes last season’s skipper Roberts, Nugent said: “We have some exciting young talent in the club, who alongside our experienced players, and new signings, we will push to go one better last year.

“We were a little off the pace for parts of last year, so hopefully we can learn from that and push to finish at the top of the table this year.”

Nugent, who works as a technology consultant for IBM in London, has played for Henley since he was seven years old. After a short break playing for Harpsden he rejoined Henley where he represented all four sides in their respective divisions as well as regularly representing Berkshire and having stints with Hampshire and Loughborough Marylebone Cricket Club University. Nugent said he will be working closely with the club’s newly appointed coach Harry Jordan. Nugent added: “I am looking forward to him working with the club.

“Harry has been a part of the club for the last few years and will be a brilliant asset as we look to strengthen all of the teams and develop the youth within the club, especially now that the second and third teams have the challenge of playing in their newly promoted leagues.” As well as Jordan’s help, Nugent will also have support from new vice-captain Adam Searle. Nugent said: “I will also have the support from Adam Searle, who did a fantastic job throughout pre-season leading the side, and captaining the Berkshire U18s last year for a lot of the season.

“With a former club captain and three lads who have captained minor counties teams previously, there is no shortage of support if I need it.”