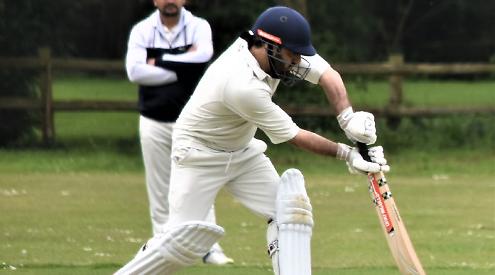 HURLEY went down to a 10-wicket home defeat against DENHAM in their Premiership clash at Shepherds Lane last Saturday.

Early morning drizzle had left a damp feeling in the air as Yasir Gul won the toss and opted to bat first, opening the
innings himself with Umar Zamman.

The track had pace and bounce for the bowlers and the Denham attack made the most of it.

The home side were soon 11-2 with both openers falling to Faisal Mahmood. JD Singh and Mike Walton saw off the opening attack but Kennedy Newbert (3-5 from nine overs) and Simar Bhatia (5-26) made scoring difficult and the pressure told as Singh went for an expansive drive and lost his middle stump to Newbert.

Walton stood resolute against everything the Denham bowlers could muster but his teammates couldn’t as Hurley were all out for 58 with only two partnerships reaching double figures.

In reply, despite a tight half a dozen overs from Harpreet and Kayani, which only yielded 13 runs, Hurley were unable to force a breakthrough.

Ricky Butt (40 not out) gained in confidence and rode his luck on a couple of occasions while Lupton (14 not out) provided the ideal foil for Butt’s aggression as Denham reached the target in the 13th over. In Chiltern Division 2, visitors HARPSDEN 2nds went down to a 70 run defeat at KNOTTY GREEN 2nds.

Batting first, the home side put on 265-9 with Arpit Shah top scoring with 126 not out. Tom Mitchell returned the best figures for the visitors, taking 3-38 wilst Mrinal Madina and Qaisar Abbasi both chipped in with two wickets each.

In reply Harpsden were bowled out for 195 with Ed Birkett top scoring with 45. In Chiltern Division 2, HURLEY 2nds ran out six wicket winners at KNOTTY GREEN 3rds thanks to a solid bowling and batting performance.

Hurley won the toss and put the hosts into bat first. Knotty Green openers Paul Slade (81) and Sidhu Raghunath (37) saw no major alarms as they rattled along at five an over.

Raghunath was dropped early in his innings and went on to strike some lusty blows
including a six. The breakthrough was finally made in the 21st over when Raghunath was run out trying a tight second run, beaten by Hamzah Zaman’s accurate throw to the keeper having added 104 for the first wicket.

Cole rotated his seamers to try and make the breakthrough before turning to his spinners. Ravi Singh (2-29), Liam Cole (3-52) and Phil Ridgeway (3-31) all had success as the the home team lost nine wickets for 74 runs.

Singh had Dhruv Patel (0) lbw and after swapping ends had Slade caught and bowled with one that popped off the rapidly drying pitch, 135-3.

Only Nick Patel (29) was solid at one end whilst the batters kept coming and going. He was finally tempted by a flighted delivery from Cole to be stumped by Akash Singh to leave Knotty floundering at 176-7.

Singh had a hand in three of the dismissals, also removing Michael Butcher (eight) thanks to a catch behind off Cole. Ridgeway joined the collapse, making full use of the slope to extract some turn, by having Kishan Patel (13) bowled attempting to heave to leg, Rahul Monsy (three) adjudged lbw and skipper Jack Patel (one) well caught at long-on by Mandeep Singh.

Joban Singh returned to remove Jack Slade (0) thanks to a ricochet off Singh’s pads and leave Knotty Green on 187 all out.

In reply an impressive 132 run opening stand by Clive Williams (49) and Josh Cole (66) saw Hurley close in on victory. Although both batsmen were dropped several times, a plethora of extras helped the visitors to a solid if unspectacular start against the new ball and Knotty medium pacers.

Williams took a liking to the extra pace of first-change Paul Slade hitting some fine drives before finally falling one short of his half-century in the 31st over, bowled by Kishan Patel.

Cole also played some good drives as timing the ball became tricky and some inventive field placings by the Knotty skipper kept the run rate down.

Needing nearly five an over to win, impetus was provided by Mandeep Singh (20 off 12 deliveries) before being stumped by the keeper off Jainham Shah.

Cole was finally caught behind off a thin inside edge off Dev Barot. Ravi Singh (four) was bowled by Slade but this was the last success as Joban Singh (seven not out) and Ridgeway (11 not out) saw off the remaining runs with minimal fuss to see Hurley to 190-4 with five overs to spare.