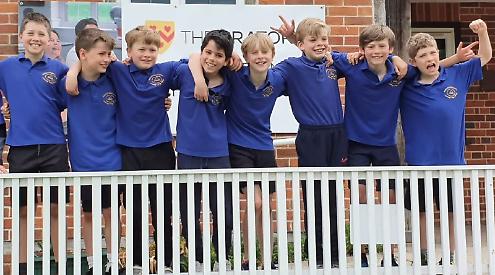 MORE than 70 youngsters enjoyed some fun in the sun as they took part in Peppard Stoke Row’s first primary schools Kwik Cricket competition for years four and five on Wednesday of last week, writes Richard Ashton.

Emmer Green, Caversham Primary and Thameside all provided two teams for the afternoon, while one each came from Woodcote and Pangbourne.

The sides all played four matches at Peppard Common, with Woodcote eventually crowned the inaugural champions on a day when enjoyment was the number one aim.

The club’s first-team wicket-keeper Michael Chard, who runs MNR Coaching, led the organisation and running of the event and said: “It was a fabulous day, and we expertly evaded the flash floods by around 10 minutes.

“Well done to everyone who made the day so enjoyable, but especially The Oratory School young helpers who controlled the matches by scoring and umpiring, Priya Sukul and Nichola Watts for sorting the refreshments, and director of junior cricket, Adam Lotery, for his support.

“Rachel Homer (sports co-ordinator at Caversham Primary) also did a wonderful job using her cluster network to ensure we had eight teams.

“However, the most important people were the players and there was some fabulous cricket on show — my thanks to all the teachers who brought their pupils along. It was brilliant to see so much action and hopefully the kids will continue to play cricket as they get older.” Peppard Stoke Row Cricket Club runs junior cricket for boys and girls from U6s to U19s. For further details about joining the club contact Nichola Watts on 07880 743 112 or via email at nichola2watts@yahoo.co.uk