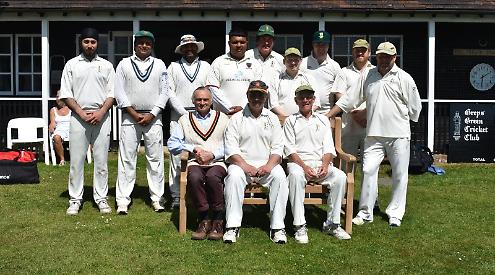 HOME side GREYS GREEN drew with visiting Oxford side ISIS.

Winning the toss, the hosts put the visitors into bat first and this looked a good decision as both openers survived chances in the early overs with Ahmed and Singh both bowling probing spells.

After that they settled into a productive opening stand which had reached 96 before Walter was caught by Shafqat for 32.

Beavon joined Bowles to continue the steady accumulation of runs in the face of good controlled spells by Shafqat and Rugg before he was stumped by Holroyd to give Rugg his second wicket.

Singh returned to bowl Bowles for 65 and with Stanbury playing some good shots towards the end the Isis innings finished on 202-3.

During the tea interval there was a short ceremony to dedicate a new bench, donated by the families, in memory of club stalwarts Mick and Di Cusden who had both died within the last 18 months.

The Greys Green reply started disastrously with both openers dismissed cheaply and in the face of challenging spells by Ponsford in particular, well supported by Symons they slumped to 42-5.

At this point Singh was joined by captain Skilleter and they firstly steadied the ship before going on the offensive as Isis made bowling changes.

Together they put on 91 before Skilleter was bowled by the returning Ponsford for 30. Singh continued to play aggressively, unfurling some good shots before he was bowled in the final over for 86, giving Ponsford figures of 4-21. By that time the draw was assured with Greys finishing on 146-7.

Hosts HURLEY ran out 97-run winners against BINFIELD. Hurley won the toss and elected to bat first with the opening partnership of Hinnell and Yasir Gul seeing off the Binfield opening attack of Jon Watts and Zoe Docherty with a partnership of 21, ended when Hinnell, hampered by a hamstring injury, was run out. Josh Cole replaced Hinnell and played a variety of good shots to help push the score along. Paul Morgan accounted for Gul, stumped by Withana.

Cole was next to go, bowled by a delivery from Suresh Anbalagan that kept low.

A mix up between Archie Wild and Haider-Ali Baig saw the latter run out without facing and when Mubashir Nabi departed shortly after with only a single to his name the hosts were struggling at 59-5. Ollie Rogers joined Wild, and the youngsters got the innings back on track with a partnership of 37 before Jaden Slaughter rearranged the furniture of Rogers.

Kayani, Zaman and Liam Cole all came and went without contributing much to the score leaving Hurley in a precarious position at 109-9. Archie Wild showed a cool head, manipulating the strike to add 46 runs for the last wicket with Mo Basharat who finished with one not out.

The Binfield reply struggled as Zaman and Rogers only conceded a dozen runs off the first 10 overs with Zaman reeling off four consecutive maidens.

The dismissal of Chris Jones (eight) by Rogers led to a mini collapse as Zaman then had Watts (three) caught by Liam Cole who held on to a sharp chance.

Baig replaced Rogers and struck with his second ball to bowl Wade. With the exception of number 11 Paul Morgan, none of the Binfield batsmen
managed to reach double figures as a procession of wickets followed.

Pat Hinnell held onto a sharp chance in the slips and Nabi pouched one in the gully as Pete Henly (four) tried to guide the returning Rogers to third man. Rogers second spell of 3-5 in four overs reduced the visitors to 46-9.

One over from Kayani conceded eight runs, all in wides and he was replaced by Zaman who only needed one delivery to conclude the proceedings.

Visitors HETAROI opted to bat first at CHECKENDON and looked to have made the correct decision with a total of 196-9 in 35 overs.

Skipper Henry Wilmen top scored with 61 in 32 deliveries, supported by Ed Burn with 47 and Mike Pennington who opened with 40.

Checkendon’s response began badly as they were reduced to 93-6 in 21 overs which included two run outs.

However, the contest was subsequently transformed by a remarkable innings from Sathia Jobe, whose 75 not out in 57 balls included six sixes and five fours. His unbroken partnership with Veeru Kilhar for the seventh wicket was worth 107 when the target was surprassed with an over to spare.

Teenage pair Danny McAlister and Tom Vockins both bowled fine new-ball spells for the home side as they kept Unicorns in check early doors, the latter eventually making the breakthrough when dismissing Harry Roberts for 14.

Adam Lotery and U14 Rudi Derbyshire helped set a platform for the visitors’ middle-order of Sam Heritage (53 from 41 balls in a maiden half-century for the club) and Fergus Nutt (45 not out from 28) to push their side up to 177-4 after 35 overs.

Derbyshire and skipper Ruaridh Scott proved frugal with the new ball before Nettlebed opener Mike Butler began to get going, eventually dismissed for 36 by Aled Roberts.

The game continued to hang in the balance before the Unicorns switched to their second and third spinners, Taylor Vines and Richard Ashton (3-21) nudging their side back in front as the game headed towards a thrilling denouement.

Nettlebed skipper Sam Butler (55 not out from 30 balls) kept the contest alive, but his side were not quite able to cross the line as Derbyshire returned to bowl the final over with a maturity well beyond his years in closing with figures of 0-14
from six, the hosts ending on 168-5.