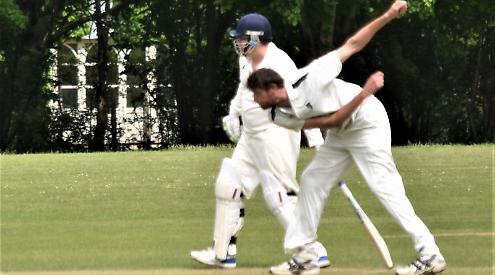 NEWLY promoted HENLEY 2nds got their Division 1 campaign off to a winning start as they beat hosts COOKHAM DEAN by 66 runs last Saturday.

Batting first, Henley put on 284 with Charlie Homewood top scoring with 62 from 55 deliveries and Aakash Radkhakrishnan chipping in with 43.

In reply the home side were all out for 218 with Declan Farland taking 3-44 and Freddy Loveland and Sairam Ramamurthy both taking two wickets each.

In Division 3A, KIDMORE END ran out 42-run winners away at THEALE AND TILEHURST at Doui Park in a match played on a newly-laid wicket which had a number of patches on it that resulted in the ball shooting along the floor.

New Kidmore skipper Manpreet Singh won the toss and elected to bat. The opening stand of 34 (which included 11 extras) was the largest partnership of the game.

Devesh Gauchwal bowled accurately collecting one wicket for his efforts, bowling Mittal (15 from 28) with a good delivery. Runs were being scored quickly due to the errant bowling of the home side. In a low scoring game Theale and Tilehurst gave away 44 extras.

Matt Bolton’s league debut for Kidmore saw him top score with 18 before he fell edging a wide ball as he tried to drive. Ben Tegg was dismissed for nine caught by a diving one handed catch.

As the pitch started to misbehave more, Leach was trapped lbw by a ball that shot along the floor and struck near his ankles. Hearn was bowled by spinner Clewlow by another ball that hit the base of the stumps and Frost was another victim of the pitch, bowled by Jeffrey. Tyagi ended up second highest scorer with 15 when he was dismissed. Eventually Kidmore were bowled out for 128 from 32.5 overs.

In reply Frost relentlessly attacked the hosts. Wickets fell with regularity. 0-1, caught at mid-on bowled Frost; 7-2, lbw Frost; 18-3 caught Tegg bowled Frost; 22-4 bowled Tyagi; 25-5 lbw Frost, 29-6 bowled Frost. Four of the first six wickets fell to balls that did not bounce as expected. This trend would continue, when Frost who had taken five wickets at this point was replaced by Taliyan. Debutant Taliyan trapped Gauchwal lbw for 0 with another shooting delivery. At 39-7 Why and Clewlow put on 22 for the eight wicket. Taliyan managed to induce a false shot from Why to bowl him for 19.

At eight wickets down Clewlow batted intelligently using his height to get right out to the ball and combat the irregular bounce — he would be the top scorer of the day being the only batsmen to pass 20 runs.

The ninth wicket accumulated 24 runs before Singh brought on the seamers, as he returned Frost to the attack, to bowl in tandem with Kavanagh.

The pair put a squeeze on the run rate and the pressure helped Frost take his sixth wicket of the day as he had Clewlow out lbw.

Spin twins Kedia and Taliyan replaced the seamers and dismissed the final batter, lbw to another scuttling ball.

WARGRAVE 2nds beat visitors BAGSHOT by one wicket. Batting first Bagshot were bowled out for 193 with Jack Clark taking 4-15 and Max Meader 3-40. In reply, Wargrave edged the win as they put on 194-9 with Simon French top scoring with 75 not out.

Elsewhere in the division newly promoted HARPSDEN defeated visitors WINDSOR by four wickets. Skipper Adam Birkett lost the toss and Windsor chose bat on a flat, dry pitch. The home side got off to a dream start as Aston had Lazarczuk caught behind for 0.

Zeimkendorf and Lingala then combined well to get the score to 71-1 before Lingala holed out to mid on for 41. Dawson and Furber then pulled back the scoring rate, picking up four wickets between them leaving the visitors on 101-5 in the 23rd over. Off spinning debutant Jack Walton was then introduced to the attack and had an instant impact on the game, reducing Windsor from 140-5 to 193 all out and finishing with figures of 5-28 as the home side were set 194 to win.

The Harpsden innings got off to a stuttering start, with Watson, Gabriel and Birkett departing early on to some skillful seam bowling from Jackson and Turner.

Franklin joined Jones at the crease at 20-3 and the pair launched a counterattack, putting on 83 in the space of 12 overs before Jones was bowled by a swinging delivery from Dixon for 54.

Dixon then struck twice in quick succession, removing Abassi and Walton in the same over to leave the home side struggling once again on 110-6.

Malloy joined Franklin at the crease and the pair began to build a partnership, striking a number of boundaries and swinging the match back towards the home side. Malloy in particular took the attack to the bowling reaching 40 not out in the 27th over with Franklin finishing on 70 not out as Harpsden chased down the total with 18 overs to spare.

PEPPARD STOKE ROW defeated home side PURLEY by nine wickets in their maiden Division 4A encounter.

The visitors were impressive from the moment Scott Harris (3-21) ripped through the Potters’ top order, and with Owen Simmons (3-18) and Kirk Graham (3-10) providing no let-up, Purley were dismissed for just 107.

The visitors’ reply proved a relatively serene affair, veteran Andy Watts and Fergus Nutt (60 not out) sharing a half-century opening stand before youngster Oli Sedgwick finished the contest with an unbeaten 23 from just 12.

Elsewhere in the division, HENLEY 3rds went down to a five-wicket defeat at MAIDENHEAD AND BRAY 2nds.

Batting first, Henley put on 254-6 with Oliver Buckle top scoring with 69 and Adam Lubbock chipping in with 46. In reply, the hosts eased to 256-6 with two overs to spare.

In Division 5A WARGRAVE 3rds ran out nine wicket winners at home against KEW 2nds. The visitors, batting first, put on 189-8 from their allotted overs while Wargrave, in reply, eased to 191-1 with Mark Richards top scoring with 109 not out.

KIDMORE END 2nds ran out 75-run winners in their home Division 7A clash with SLOUGH 5ths. Abhishek Chatterjee top scored with 112 as the home side posted 272-8. In reply Slough were bowled out for 197 with Jake Easton taking 4-28.

In Division 8A KIDMORE END 3rds went down to a 35-run defeat against visitors READING 3rds.

Batting first Reading put on 152-7 while Kidmore End, in reply, ended on 117 with Jay Rathore top scoring with 35.