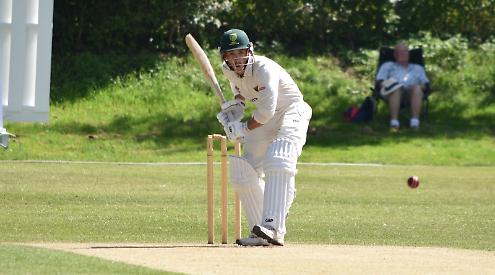 HENLEY opened their Home Counties Premier League campaign with a resounding 105 run win against a revitalised OXFORD side which turned up at the Brakspear Ground fancying its chances, but in the end, left disappointed, having to settle for five bonus points last Saturday.

Henley’s success owed much to a virtuoso batting masterclass by former skipper Mike Roberts whose unbeaten 180 runs off 175 balls (18 fours and eight sixes) first rescued the Henley innings when precariously placed at 21-3, then blunted the Oxford bowling attack, before going up through the gears, and driving the home side to an otherwise improbable score of 283 in 50 overs.

In the process Roberts set a new Henley club record in the Home Counties Premier League, emulating his and the club’s former best of 160 not out against Tring Park in 2017.

Winning the toss on a fine morning, a greenish tinge to the wicket undoubtedly influenced Oxford’s decision to field, a decision that bore early success as Johnny Connell shouldered arms three balls in to a ball that brushed his pads, Matt Rowe holed out to Oxford skipper, Mo Ayub, at mid-on and Richard Morris fenced his second delivery to Perera at point.

The incoming Euan Brock soon caught up Roberts’ score and contributing to a lively 48 run partnership before being caught behind. 76-4 was less of a crisis but hardly comfortable with Roberts only on 28 not out.

Much as at Ealing a fortnight ago, Stewart Davison glued the innings together in a 153-run partnership with 25, all singles bar a pair of run twos, supporting Roberts, keeping the bowlers at bay, and letting his partner get on with putting Oxford to the sword.

Roberts duly obliged, hitting the ball to all parts deploying the full lexicon of shots either side of the wicket, into Remenham Lane, onto the pavilion roof, into the property adjoining the pavilion and serially into and over the shorter boundary abutting the Little Angel.

With the batting Oxford now possess, 283 was by no means unattainable. New signing Durness Mackay-Champion, who aspires to play for Scotland, rattled off three fours, before skying one to Harry Jordan at shortish square-leg.

Though Perera and Matthews consolidated, the former displaying some nice touches, the innings lacked pace and urgency. Wickets fell with regularity and Oxford were always behind the required run-rate.

Adam Searle made the ball fizz and bounce, removing Matthews, Campopiano and Tait. Rowe trapped Perera lbw and Sheikh put a torrid first over behind him, swapped ends and took out Ayub, batting too low down the order to now be truly effective, Sabir, and Ives before Matt Rowe wrapped things up with the wickets Swanepoel and, finally, Jupp.

Both Rowe and Searle owed a wicket apiece to Simon Wheeler, who topped off a fine bowling display with two outstanding catches on the short side of the wicket. The only blot on the bowling landscape was 24 wides which made extras (30) the second highest scorer in the Oxford innings.