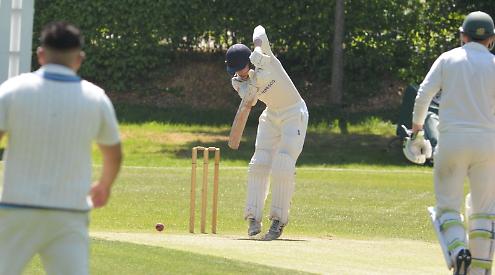 LIAM Hilditch bludgeoned 159 runs off just 145 deliveries to help HENLEY 2nds maintain their winning start to their Division 1 campaign as the home side saw off BURNHAM by 81 runs.

The opening batsman hit an astonishing 96 runs from boundaries as he hit 15 fours and six sixes. Number three batsman Aakash Radhakrishnan chipped in with 77 as Henley put on 356-7 from their allotted 50 overs.

In reply Burnham were bowled out for 240 in 41 overs with Chanula Wickramaratna taking 6-41.

KIDMORE END ran out eight-wicket winners in their home Division 3A clash with ALDERSHOT that lasted just 49 overs.

Having lost the toss, Aldershot batted first on a good pitch for batting with the strip having good carry and the bounce was true.

However, this did not seem to help the Aldershot batting line-up as opening bowler Frost, as erstwhile skipper, got stuck into the top order early bowling opening batter Jalan for five.

After a brief counter-attack by Farr (19), he too was bowled by Frost shouldering arms and losing his off bail. Frost finished with 2-19 from his 6.5 overs.

Tyagi also bowled aggressively, beating the bat on a number of occasions but without luck. When the seamers came out of the attack the pressure did not relent as Kidmore used spin bowlers. Taliyan, Kedia and Bolton turned the screw. They were ably supported by a fine display by Tegg behind the stumps and good catching in the outfield.

Taliyan bowled consistently with control picking up four wickets due to the pressure he amassed, bowling three maidens and with an economy rate around two. One wicket was thanks to a good take at the wicket by Tegg off of a thick edge. Kedia, despite being a left arm spinner, was economical in his bowling taking two wickets, varying his pace in a crafty fashion.

Bolton, the third spinner brought into the attack, bowling right arm off spin, also used conditions well and his wicket was thanks to a good catch by Tyagi who had to stare into the sun before taking the chance.

The final wicket was thanks to a run out, under armed by Frost, gathered in by Tegg, to run the last batter out and finish the innings off for under 100 in 31.5 overs.

After two overs Kidmore were 33-0, as Mittal and Singh set about errant bowling. Mittal scored a quick-fire 19 before he was caught in the covers off a full toss. Bolton batted in a more judicious manner but skipper Singh did not take his foot off the pedal.

Singh played one immense cover drive for six that cleared the boundary with ease as he timed the ball well and batted with grace as he hit 39 from 41 balls.

Tegg came in at four and quickly finished the game off sweeping; Bolton, 17 not out and Tegg 13 not out saw saw Kidmore triumphed by the 19th over.

Elsewhere in the division, HARPSDEN went down to a three-wicket defeat away at BAGSHOT.

Batting first the visitors put on 252-9 from their 45 overs with Christian Whittaker top scoring with 96. In reply Bagshot reached their target of 254-7 with one over to spare.

WARGRAVE went down to a heavy 153-run defeat at SONNING.

The home side, batting first, put on 277-4 from their allotted overs with Wargrave being all out for 124 in an innings that saw Faaez Shamsi top score with 57.

Fergus Nutt matched his previous best league score for PEPPARD STOKE ROW and returning Will Legg made an unbeaten 86 as the home side made it two wins from two Division 4A games with a 119-run victory against THATCHAM TOWN 2nds.

The visitors surprisingly elected to bowl first on a flat Peppard Common track, and the evergreen Andy Watts and Nutt made no mistake in leading their side to 133-0 after 23 overs.

Watts fell for a well-crafted 70, but that merely heralded an acceleration in the scoring rate, Nutt free-wheeling his way to 135 from 113 balls and Legg contributing his runs off 65.

With skipper Dan Hayden and Kirk Graham providing useful cameos at the end of the 45 overs, Peppard had set an imposing 343-3. The Thatcham reply never really got going as Scott Harris (2-25) and Archie Malcolm (2-34) put the away side on the ropes, and despite Chris Rochfort’s 55 and 36 from captain Paul Hemming, they were only able to reach 224-8.

Elsewhere in the division, HENLEY 3rds went down to a 32-run defeat at home against FINCHAMPSTEAD 3rds.

Batting first the visitors set an imposing score of 331-7 with Adam Lubbock taking 3-69. In reply John Neville hit 62 not out and Rob Kenworthy 54, but this was not enough as Henley ended their allotted overs on 299-9.

Batting first the home side were bowled out for 175 with Atul Pawar taking 4-16. In reply Wargrave reached 176-8 in just over 31 overs with Paulo Toffolo top scoring with 88.

KIDMORE END 2nds ran out 95 run winners away at FLEET 2nds in their Division 7A clash.

Batting first the visitors put on 258-8 with Mark New top scoring with 55. In reply Fleet were all out for 163 with Razavullah Shaik and Azhar Udeen both taking three wickets each.

In Division 8A, KIDMORE END 3ds went down to a 15 run defeat at COVE 3rds.

Batting first the home side put on 153-8 with Daniel Sporle taking 3-32. In reply Kidmore End were bowled out for 138 with Tom Wilkinson top scoring with 50.

WARGRAVE 4ths went down to a 153 run defeat at home against STOKE GREEN 4ths in their Division 10C encounter.

Batting first the visitors put on 266-8 before bowling Wargrave ended their innings on 135-8.