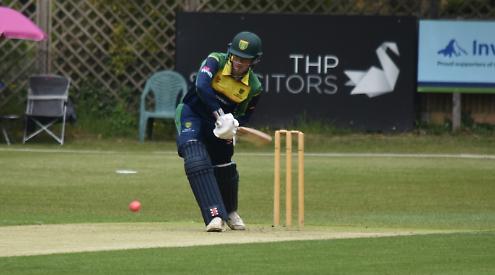 IN a cliffhanging finale, HENLEY chased down HIGH WYCOMBE’S challenging 300-run target, scrambled a single off the last ball of the 50th over and snatched a tie from, in equal measure, the jaws of defeat and victory last Saturday.

On a cloudless day, visitors Henley won the toss and elected to field, encouraged by a greenish tinge to the wicket.

Callis was an early victim as Henley skipper Tom Nugent’s boot diverted Woodland’s drive on to the stumps with Callis out of his ground. But that was the only excitement for some time as both runs and wickets proved elusive.

After a torpid 25 overs, Wycombe had just 86 runs on the board, which proved too much for Marles’s patience, holing out to Richard Morris at long-off.

The Wycombe innings needed an injection of brio, and it came in the form of Scottish international and Oxford UCCE skipper, Chris McBride, who rattled up 66 off 51 balls, energising Woodland in the process.

When McBride departed in the 42nd over, caught at backward point thanks to the timely introduction of Matt Rowe, Wycombe were 207 to the good, Woodland was on 80 and Wycombe had wickets in hand to go large in the last few overs.

The incoming Casterton pushed the next delivery into the covers and set off for a run that was of no interest to Woodland and paid the price.

Woodland brought up his century but departed soon after, top-edging a reverse sweep. Russell made a short, sharp, but meaty contribution before becoming Rowe’s fourth victim. The Wycombe lower orders went for it and Henley needed 301.

Openers Johnny Connell and Rowe took full advantage of a hospitable track to post 122 for the first wicket. Connell, a clean striker of a ball, was imperious both sides of the wicket, including a couple of mighty blows into the River Wye boundary which the nearest fielder signalled as sixes but which were rewarded with signalled fours by the umpire, whose decision on such matters is final.

Mike Roberts departed prematurely to a ball that kept low, Richard Morris perished out at mid-wicket and Rowe completed a fine 74 before also being caught in the deep.

That made it 202-4 with 12 overs left. Time enough to get 99 runs provided the batting held up. Euan Brock and Shaariq Sheikh came and went and Henley’s innings needed a real boost. It came in the 45th over as hard-hitting Stewart Davison took down Chapman for 23 (including three sixes and a four), the over going for 25 to set up a grandstand finish.

Eight runs came in the 46th over off Haddow’s spin, but in the 47th the returning Woodland leaked 11 and Henley needed 21 off 18 balls. Nugent perished — advantage Wycombe, Henley needing 17 off 12 for the win.

The 49th over produced two runs and Davison was gone for a crucial and valiant 47. What could Harry Jordan and Searle do? A run to Jordan, a pair to Searle, a mighty six for Searle, two by Searle, two more by Searle that was so nearly a four.

Two were needed off the last ball, chaos all around, a scruffy single and the Wycombe players slumped down dejected.

For Henley, it was the euphoria of a great run chase tempered by the sadness of missing out on victory by one run. Those four runs that never were would have come in handy after all.

Skipper Nugent was, nonetheless, upbeat after the match. He said: “There are a lot of positives to take from the day. Everyone contributed with bags of energy in the field.

“We need to address a few basics and cut down the extras, but the attitude and belief during the run chase after a tough end to the Wycombe innings was priceless.”

Tomorrow (Saturday) Banbury visit Matson Drive for the 11.30am start.