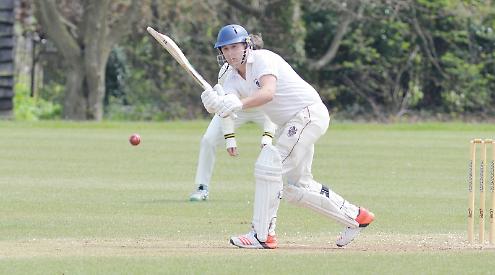 HENLEY 2nds slipped to their first Division 1 defeat of the season as they went down by six wickets at ICKENHAM in a rain-affected match on Saturday.

Batting first Henley put on 161-8 off their 50 overs, a target that was adjusted to 155 due to the weather using the Duckworth Lewis method. Sahil Desai top scored for Henley with 43 whilst extras was the next top scorer with 22.

KIDMORE END maintained their 100 per cent start to the season as they ran out 38-run winners away at WHITE WALTHAM in their Division 3A clash.

Singh and Bolton opened the batting but this partnership was broken early when Beard had Singh caught.

The first hour of the game was tough for Bolton and Frost who had to bat watchfully when the pace of the pitch was a little inconsistent. As the sun shone the pitch hardened and dried and runs started to flow. Frost drove, nudged and cut well but the star of the first wicket partnership was Bolton who became increasingly fluent, quick to punish anything short, and ruthless with anything that erred to leg stump.

The pair put on 115 before the slower bowlers entered the attack and both Bolton, who scored 75 (77) striking 10 fours and a six, and Frost who scored a more measured 38 (65) both fell in quick succession.

The middle order struggled to get the slow bowling away and Kidmore went from 115-1 to 12-5. However, the lower middle order came to the rescue and with 35 from just 24 balls with Gregor Hearn putting in a key innings of 35 before he was out lbw.

White Waltham went on the defensive and pushed fielders out to the boundary, which created space for Nasim to hit 32 not out and the aggression of Tyagi.

This pairing put on 45 runs for the eighth wicket and when Tyagi was bowled for 27, with four overs to go in the innings, it gave Taliyan free reign to attack with abandon. Talyan added 28 runs from 14 balls striking three sixes. The Kidmore innings finished on 264-9.

The Kidmore defence started well. Despite not taking many wickets, Tyagi (1-25 from seven overs) and Frost bowled economically giving little away as only 28 runs were scored from the first 10 overs.

This proved important later in the game as the match was dictated by the increasing run rate. Eventually Chapman, 19, was bowled by Tyagi.

The White Waltham innings was dominated by two contrasting players. Metherell who scored a watchful 47 and Scarborough, who although lucky to be dropped when his score was low, scored 99 from 69 balls hitting nine fours and six sixes.

Kidmore rotated their bowlers well, chipping away with wickets at the opposite end from Scarborough. Frost snagged one lbw, Kedia picked up two wickets, one bowled one lbw, as did Taliyan.

White Waltham were in the game right up until the last few overs, and although he was on the receiving end of Scarborough's savagery, it was Kavanagh's pinpoint yorker that dismissed the batsmen one run short of a century, that sealed the game for Kidmore End.

HARPSDEN moved up to third place in the table following their 254-run home win against THEALE AND TILEHURST.

Zac Jones was in fine form for the hosts as he top scored with 179 whilst opener Ben Watson scored 53 as the villagers posted a huge total of 399-7 off 45 overs.

In reply, Theale and Tilehurst were dismissed for 145 with Jamza Abassi taking 4-30 and Graham Furber 2-30.

Elsewhere in the division, WARGRAVE 2nds ran out six-wicket winners at home against ALDERSHOT.

Batting first, the visitors were dismissed for 127 with both Jack Clark and Mandip Sohi taking three wickets each.

In reply, Faaez Shamis top scored with 48 not out as Wargrave eased to victory, closing on 128-4. In Division 4A, PEPPARD STOKE ROW just about snapped their two-match losing streak with a dramatic four-run win at home to TAPLOW in a high-scoring run fest which went down to the final over.

However, Kirk Graham (96) and Jason Vaughan-Davies (98) initially rebuilt before launching a rambunctious assault on the visiting attack which ultimately meant their side smashed a stunning 186 from the final 16 overs of their innings, Scott Harris adding an unbeaten 28 as Peppard posted 308-6 from their 45 overs.

The latter was bowled by Connor Lamsdale for an imperious 61 on the crest of drinks, and with the left-arm spinner and Matt Syddall (3-63) turning the screw, Peppard seemed in control as Taplow fell to 201-6 with 11 overs to spare.

Naveed Akram then blasted the ball to all parts in leaving his side requiring 17 from the final over.

The first ball of Kyle Tappan’s (2-22) denouement just cleared the leg side boundary for a maximum, but the teenager held his nerve to bowl four consecutive dots prior to Akram (67 not out) smiting another blow for a six to end the contest. Elsewhere in the division, HENLEY 3rds went down to a 102-run defeat at WOKINGHAM 3rds.

The home side, batting first, were dismissed for 224 with Laxman Gurgun taking 4-34 and Jaylan Crockett 3-29 for the visitors.

In reply, Henley were dismissed for 122 with opener Rob Kenworthy top scoring with 43.

In Division 5A, WARGRAVE 2nds slipped to third place in the table after going down to a 120-run defeat at home against CHESHAM 3rds.

The visitors, batting first, put on 193-5 from their allotted overs with Kevin Whiteman taking 3-22. However, in reply Wargrave were bowled out for 73 with just three players managing to make double figures.

KIDMORE END 2nds remain second in Division 7A despite going down to a two-wicket home defeat against WHITE WALTHAM 2nds.

Abhishek Chatterjee top scored with 72 as Kidmore End were dismissed for 200. In reply, White Waltham reached their target of 204-8 to win the match with Vikas Chib taking 3-30 and Rory Elliott 2-56.

In Division 8A, KIDMORE END 3rds went down to a 30-run defeat at BINFIELD 3rds.

Batting first the home side put on 195-5 from their allotted overs with both Todd Butler and George Malaperiman taking two wickets each for the visitors. In reply, Kidmore End were dismissed for 155 with Jonny Abbott top scoring with 32.

The Division 10C clash between KIDMORE END 4ths and WARGRAVE 4ths was forfeited by Kidmore End.