Bogey side strike again to knock Henley off top spot 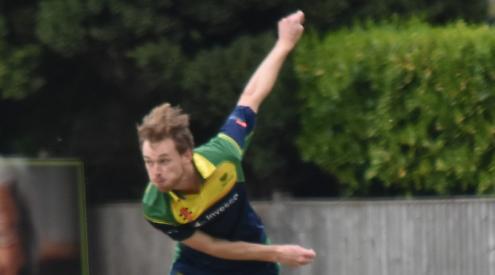 HENLEY were knocked off top spot of the Home Counties Premier League Division 1 table last Saturday as they went down to a 59-run home defeat against bogey side FINCHAMPSTEAD.

For some time now Finchampstead have been Henley’s bête noire. As recently as last season, their two victories consigned Henley to the runners up spot in the league whilst ensuring their escape from relegation on the final match of the season.

Both sides were missing key players including Finchampstead’s Toby Albert who was called up by Hampshire on the morning of the game.

Following a rain delay of 30 minutes Finchampstead began their innings having lost the toss and the early signs on an easy-paced wicket showed little signs of what was to come. The consistent Greg Smith and Ben Moffat put on 54 for the first wicket before both were dismissed in quick succession.

There followed a series of rapid dismissals before the innings closed on 144 in the 47th over. Smith’s 32 was comfortably the highest score in the match, the next highest being the 23 extras of which the majority were wides. Skipper Tom Nugent’s 3-12 would have been 3-5 had his otherwise excellent spell not conceded seven runs.

Rapidly improving spin twins Adam Searle and Shaariq Sheikh polished off the Finchampstead tail which resulted in a well-below par total for Henley to chase.

Allowing for the fact that chasing small totals can be difficult, the manner of Henley’s demise defied description.

A mixture of poor shot selection and a lack of game management skills saw the top order throw away their wickets in Twenty20 fashion. After six overs the score stood at
22-4.

Matters did not improve as Henley subsided to 85 all out in the 29th over with extras (20) being the top score. Only Nugent (16) managed to reach double figures as Finchampstead triumphed by the sizeable margin of 59 runs.

Lewis Sharp bowled his 10 overs unchanged to record his best ever figures of 6-29. The Henley innings was finished off by skipper James Woodford with 3-7 off four overs.

With the three Henley first team regulars due to return by the weekend, a much better showing is needed when they travel to league leaders Aston Rowant tomorrow (Saturday, 11am) for the first of the longer format 120 over time games.