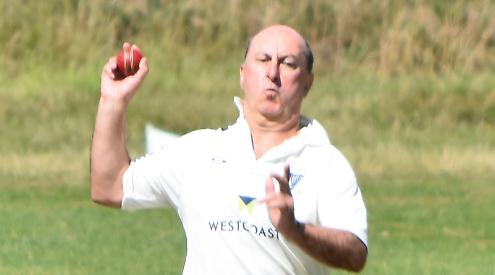 A MUCH-IMPOVED performance by HURLEY saw them get the better of a draw against THE LEE in their Premiership clash at Shepherds Lane last Saturday.

With players from both sides stuck in traffic, the match started 10 minutes late with Hurley put into bat by visiting skipper Mike Harris.

The opening pair of Prabinder Singh and Gurpreet Singh started in positive fashion albeit contrasting styles. Prabinder (27) played some classy strokes, while Gurpreet (15) preferred the more rumbustious approach. The partnership had reached 45 in the ninth over when Gurpreet holed out to Henry Quinn of Matt Line who had replaced Jordan Essex.

Line also dismissed Prabinder, clean bowled at 86-2 in the 15th over. Jagdeep Singh hit 84 from 63 deliveries before edging to the keeper to give Line his third victim.

Olly Gurney pulled up lame after one delivery of his fifth over and was replaced by Oscar Lawson who struck with his second delivery to dismiss Ridgeway (six).

At 127-3 after 20 overs the hosts were relishing the prospect of posting a large total and a possible declaration, but a middle order collapse saw three wickets fall on 162.

Muhammad Adnan (31 not out) and Amaan Mahmood (one not out) ensured they batted out the remaining overs and post a competitive total of 224-9.

The visitors’ chase suffered an early setback when Harris (seven) was out lbw to Manpreet. Bhatti survived an edge that flew to slip via the keeper and just evaded the diving attempt of Ridgeway followed by an appeal for lbw to make 22 before holing out off Saeed Ajmal.

With The Lee keeping up with the required rate off the seamers, Gul turned to Ridgeway who put a brake on the run rate and had Chaudry well caught by Manpreet.

Henry Quinn played a classy knock reaching a chanceless 50 before a cross-batted hit to a Ridgeway slower ball saw him lose his leg-stump. At 96-4 the visitors appeared to give up hopes of victory and Neil Hollister and Mark Channer dug in to frustrate the Hurley bowlers, taking the score to 140 with two overs remaining.

Hollister’s patience eventually waned and Ridgeway tempted him into a rash shot and was caught by Prabinder. The final ball of the innings saw Lawson edge to slip off Jagdeep where Ridgeway took the catch to give Hurley another bowling point.

HARPSDEN 2nds had the better of their home draw with RUISLIP VICTORIA in Chilterns Division 1.

Batting first opening batsman Duncan Verry top scored with 59 as the hosts put on 234-5 from their allotted overs.

In reply Ruislip Victoria held on at 223-9 with both James Paice and Rod Birkett taking two wickets each.

HURLEY 2nds ran out three-wicket winners away at WINCHMORE HILL in Chilterns Division 2.

Hurley won the toss and skipper Joban Singh decided to bowl first on a grassy track. The opening pair of Joban Singh (2-37) and Mo Basharat (2-30) worked hard in the heat, and it was Basharat who got his reward in the second over, removing Brad Quelch (six) as he chipped the ball up to mid-on, where Joban Singh took a simple catch. The next 10 overs were uneventful with both batsmen looking to score and doing so successfully, adding 40 runs for the second wicket, going at four an over.

In the 12th over Mo Basharat picked up his second wicket, bowling Stuart Worley (20) with a full and straight delivery. This gave Hurley the motivation they needed as in the 15th over Joban Singh found his line and length picking up two wickets, both bowled, PJ O’Hare (one) and Mick Wickins (five). This left the score at 62-4 at the drinks break.

Joban Singh made the first bowling change, bringing Parvinder Hunjan (1-38) on to replace Basharat. This paid dividends in Hunjan’s second over, as he had Winchmore’s opener Josh Woodland caught at mid-off after making 28 by the leaping Basharat, who plucked the ball out of the air one-handed. At the score on 65-5 from 18 overs, Singh turned to Kumayle Hussain (3-17) in an attempt to add further pressure to the Winchmore Hill batsmen. This worked as in his first over, Hussain had Omar Khan edging behind to Akash Singh who took a good low catch to remove the number six.

Jake Quelch (36) looked to counterattack the Hurley bowlers after being dropped on his first ball, and although being rather agricultural, he took a liking to Hunjan, hitting him for multiple boundaries in an over, prompting a field change where there was only one fielder on the off side.

The Hurley bowlers kept working and picked up regular wickets at the other end where Hussain had Scott Young bowled after a lengthy stay at the crease for a duck.

This left the score on 115-7 from 25 overs when Singh turned to the spin alternative of Liam Cole (2-25). It was Hussain who picked up his third wicket, bowling Kuljit Lally (19).

The first ball of the next over Cole had Quelch caught at mid-off by Basharat. This left Winchmore Hill struggling at 131-9 from 28 overs. A 10th wicket partnership of 26 was brought to an end by Cole, bowling Osama Munir (15) clipping the top of the stumps. This left the innings on 153 all out from 33.1 overs.

Openers Clive Williams (nine) and Akash Singh (27) went about scoring quickly, adding 32 for the first wicket in five overs. Williams was the first to go, top edging a cut shot to backward point giving Kuljit Lally (3-46) his first wicket. This brought Mubashir Nabi to the crease.

Singh was the next to fall, being caught in two minds whether to attack the ball or fend it away, ending up glancing it in the air to mid-wicket who took a good catch running in.

The next ball Lally had Jasdeep Singh bowled. Parvinder Hunjan (38) was sent in to face the hat-trick ball, who played a very confident leave making the field return to usual positions.

Nabi was next to go, lbw off the bowling of Ed Stanborough (1-25). This brought Ejaz Hussain (23) to the crease, who played some stylish shots with Hunjan, adding 49 for the fifth wicket in 12 overs. Both batsmen were finding scoring relatively easy until Hussain was caught off the bowling of Jake Quelch (3-54).

Hunjan was the next to go, missing a straight one and being bowled by Quelch. For the second hat-trick attempt of the innings after Sahil Singh was caught first ball, Kumayle Hussain (five not out) survived and looked to support Joban Singh (38 not out) who came out and played his typical innings, looking to score from most balls and being effective against the bowling attack, taking 13 off a Lally over.

The eighth wicket partnership of 35 got Hurley across the line, with Singh doing the heavy hitting, dealing in boundaries. Hussain finished the match, hitting a four through mid-wicket to end the innings on 157-7.