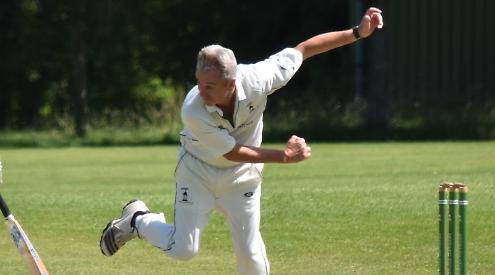 WOODCOTE went down to a 52-run defeat away at SANDHURST in their Premier Division clash last Saturday.

The home side posted 223-3 with Woodcote having an off-day with the ball and in the field. Openers Birch and Sharma put on 112 for the first wicket and Woodcote’s best bowling performance came from Olly Nicholson whose eight overs brought him figures of 1-30.

Woodcote’s reply never got going and the defeat might have been heavier but for some lusty blows from Nicholson (35) late in the innings, to complete a good individual all-round performance.

Roy Hayden moved to within six wickets of an astonishing 1,000 in the league, and Riaan Ackerman continued his fine form with the bat, but PEPPARD STOKE ROW 2nds were beaten by 49 runs at home to READING LIONS in Division 1A.

Despite excellent opening spells from Ruaridh Scott and Rob Dyer, Peppard were unable to make a breakthrough until left-arm spinner Taylor Vines (2-39) accounted for both skipper Babu Loganathan and Bharati Babu (48) in quick succession.

Ackerman led the way with 55 as Peppard set about the chase, but he received limited support as they were restricted to 173-9.

Elsewhere in the division, CHECKENDON went down to a 140-run defeat at SILCHESTER.

The home side, batting first, recorded a formidable 327-9 in their 40 overs. Opener Adrian Raja top scored with 90, followed by number three Yaunus Khan with 72 and all-rounder Akeel Khan, who hit 64 in just 29 balls. Next highest scorer was 54 extras.

The visiting top order laid a reasonable foundation to their reply with Matt Heslop (61) and Tommy Ellis (36) scoring at a run a ball.

However, the Silchester bowling was too accurate to enable any acceleration and the Checkendon innings fell away, ending on 187.

Despite losing two early wickets, Roberts, with a career-best 88, and Hall (80), whose new contact lenses have given him a new lease of life, helped their side to a competitive 245-7 on a good Les Clark Oval track.

Following a delay, Park were set a revised 186 to win from 25 overs via the Duckworth/Lewis/Stern formula, but with James Rowson (2-11) in unplayable form, they could only reach 73-5 in the chase.

In Division 3 match at WOODCOTE 2nds went down to a 70-run defeat against SHINFIELD 4ths.

Shinfield scored 186-9 in their 40 overs with Emil Reisser-Weston batting throughout the innings for 60 not out. Woodcote’s star performance came from Paul Clark whose 5-27 in eight overs included a hat-trick. Rakesh Patel also bowled well to take 2 for 38.

In reply Woodcote were never in the hunt and were bowled out for 116 in 37 overs. Gary de Pinchart was the top scorer with 35 not out, but of the other batsmen, only Chris Clark (15) and skipper, Jonny Aldridge (14) reached double figures.

Elsewhere in the division, CHECKENDON 2nds ran out 198-run winners at home against SANDHURST 2nds.

Batting first Checkendon put on 279-8 with Pradeep Shokeen top scoring with 68. In reply the visitors were bowled out for 81 with Rishabh Singh taking 6-17.