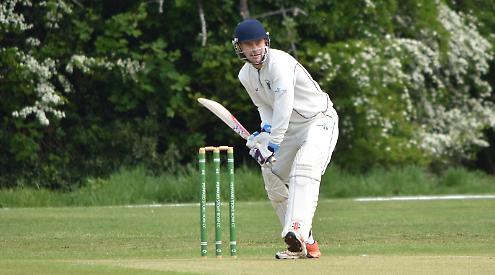 HENLEY 2nds slipped to third in Division 1 after drawing their home clash with GERRARDS CROSS at the Brakspear Ground last Saturday.

Matt Dalrymple was in fine form with the bat for Henley as he hit 103 runs from 64 deliveries in an knock that included 12 fours and five sixes. Henley ended their innings on 269-9 with Chanula Wickramaratna chipping in with 39 not out.

In reply Gerrards Cross never kept up with the run chase and closed on 207-7 with Hugo Laing taking 3-34.

KIDMORE END slipped to second in Division 3A after drawing at home to WINDSOR.

With the hosts fielding first, Frost bowled economically in his first eight over spell conceding 28 runs and picking up two wickets, including bowling opener Ziemkendorf with a delivery that went up the hill to clip the top of off stump.

Windsor batted well with the highest score of their innings 44, and the largest partnership 56, yet no one batter dominated.

The bowlers toiled away, but with little lateral movement from the wicket runs flowed steadily. Aditya Chibb made his debut and showed signs of promise while Vipin Taliyan bowled economically but without much reward, 14 overs for 46.

Mayank Kedia bowled without luck as he was often hit in the air, not always off the middle of the bat, but always into gaps. Bolton took one wicket and could have taken more Amol Tyagi, took a wicket in his second spell, and Frost took two more to finish with four when he returned at the end of the innings.

Lingala, Moss and Dixon all scored 44 while skipper Lines 32, Dibsdall 29 and Allen-Turner 20 not out as the visitors posted 242-8 from 52 overs. In reply Kidmore got off to a good start putting on 63, but once wickets started to fall, both Mittal (26) and Bolton (31) out lbw to Jackson, the need for the new batters to start quick meant shots were forced and wickets fell.

The left arm swing bowling of Ollie Jordan who took 4-15 from 10 was extremely effective. Batters came in and went scoring a few runs quickly but then were dismissed as they tried to accelerate and get back on top of the bowlers.

After the opening partnership no pair added more than 26 until the ninth wicket stand between Nasim and Frost of 33 not out as Kidmore went from 114-3 to 130-7. This scuppered any chance of a successful run chase.

Taliyan, Nasim and Frost decided that picking up bonus batting points was more important than the win and there was not enough potency to force wickets against judicious batting.

Aside from a final over of around the wicket bouncers, the last seven overs petered out as Kidmore passed 175 for an extra point. Nasim scored 30 not out and Frost 11 not out as the match ended in a draw with Kidmore End on 182-8; too many runs for Kidmore to risk chasing and not enough penetration in the Windsor bowling to force a win.

Third placed HARPSDEN ran out three-wicket winners in their home clash with ALDERSHOT.

Batting first, the visitors put on 185-8 with Rick Legget taking 3-17. In reply, opener Adam Birkett hit 77 not out and Zac Jones chipped in with 60 as the hosts reached their target of 186-7.

Elsewhere in the division, WARGRAVE 2nds ran out eight-wicket winners at home against THATCHAM TOWN.

Will Legg and Kirk Graham put on an unbroken 163-run third-wicket partnership to lead PEPPARD STOKE ROW to an eight-wicket victory at FINCHAMPSTEAD 3rds, a result that saw the visitors move up to third place in Division 4A.

Having won the toss, Finches made steady progress despite tidy opening spells from Scott Harris and Graham, the breakthrough eventually being made by the former as he removed Mike Jones and Gareth Fearon in the space of three balls.

The hosts regrouped and enjoyed a useful stand of their own from ex-Berkshire and England over-50s captain Gary Loveday and the in-form Wes Roberts.

Harris (3-60), who bowled a fine 15-over spell on a flat track and in warm conditions, eventually castled Loveday for 41 in a game-changing moment.

From 120-2, Finch were unable to build any more partnerships, and after Roberts (78) chopped on off the bowling of Owen Simmons (4-20), Sam Fooks (3-27) helped finish off the tail as the home side were bowled out for an under-par 173.

Finch, though, made two early breakthroughs to reduce Peppard to 12-2, but Legg, playing against his former club, made an increasingly stylish unbeaten 69, and with Graham (84 not out) following up his previous week’s 96, the duo guided their side to victory with more than 25 overs to spare.

Elsewhere in the division, HENLEY 3rds drew with TAPLOW at Nettlebed.

Batting first the visitors were bowled out for 232 with A Ramamurthy taking 4-53. In reply Rob Kenworthy top scored with 56 as Henley closed on 195-7.

In Division 5A visitors WARGRAVE 2nds drew away at MARLOW 2nds.

Batting first the home side put on 270-8. In reply, Wargrave closed on 242-6 with Richards top scoring with 76 and Hick chipping in with 66.

Second placed Division 7A side KIDMORE END 2nds ran out eight-run winners away at FALKLAND 3rds.

Abhishek Chatterjee top scored with 87 as the visitors posted 249-7 from their allotted overs. In reply Falkland were closed on 241-8.

KIDMORE END 3rds slipped to the foot of Division 8A after going down to an eight-wicket defeat at home against THATCHAM TOWN 3rds.

Jay Rathore top scored with 71 as Kidmore End were dismissed for 201. In reply, Thatcham reached their target of 204-2.

The home side, batting first, were bowled out for 188 with both Achint Rajeev and Ethan Meeres taking three wickets each. In reply though Wargrave were all out for 100.

Elsewhere in the division, KIDMORE END 4ths suffered a heavy 217-run defeat at WRAYSBURY 3rds. The home side put on 288-5 before bowling Kidmore End out for 71 runs.