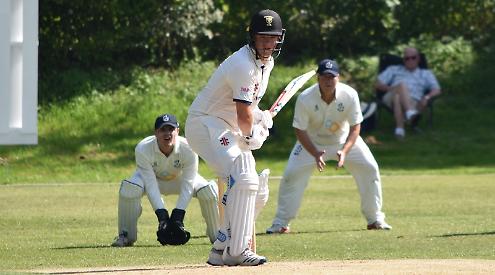 The margin of the win did not truly reflect the degree to which Henley must raise their game if they are to have an impact in the title race this season.

Winning the toss, Henley skipper Tom Nugent opted to bat. The visitors were soon on the back foot, Johnny Connell’s off-stump uprooted as he shouldered arms to the last ball of the first over to the delight of Rowant skipper Karl Penhale.

Penhale and left-armer Bethell continued to put the ball in good areas to good effect. A couple of elegant boundaries from Mike Roberts got him off the mark but he found himself pinned down. Trying to gain traction, Max Mannering snapped him up at third slip to give Penhale his second scalp of the day.

Richard Morris’s valedictory year at Henley continues to be a bit of a struggle, this time strangled down the leg side, a decision he found challenging as did Matt Rowe, adjudged lbw which made it 26-5. By then, Euan Brock had cross-batted himself out of the game, and the rest of the batting line up faced a Sisyphean task to see out 64 overs and post a defendable score.

Stewart Davison brought his workmanlike resistance to bear for a top score of 34 off 90 balls that featured three boundaries and along the way he was ably supported by Adam Searle, who showed some nice touches with 23 off 48 balls (four fours), and, also by his skipper.

But the score crept along at a snail’s pace and 64 overs felt like a distant shore somewhere far over the horizon. Absent anyone from the top order still being in post, no one looked remotely like conjuring up a dazzling game-changing score. Eventually, in over 48, with last man Simon Wheeler for company, Davison felt the need to give it the long handle, but found only Penhale at deep midwicket and Rowant needed 106 to win.

In the field everyone did their best. Wheeler removed Condon and Nugent did likewise with Rossouw, both caught behind, but Sutcliffe added ballast to the innings with a meaty 19, supporting former skipper Josh Smith who made a run-a-ball 45. Both failed to see the game out as the belated introduction of spin bore fruit. But Watling and the Rowant overseas player, Ben Le Bas, from the Bankstown Club in Sydney, did the necessary and it was job done in 25.1 overs.

Speaking after the game skipper Nugent said: “A disappointing result and performance this week, we need to make sure we learn from the last two weeks and work hard this week so that we are in a good position on Saturday. Looking at the positives, we showed good spirit and fight in the field right to end defending a low score.”

The result leaves Henley in seventh place in what is a crowded ladder where just 18 points separate them from second placed Finchampstead so all is far from lost and there is a long way to go.

Tomorrow (Saturday. 11.30am) Henley entertain basement side Buckingham Town, who have yet to win a game, to Matson Drive.