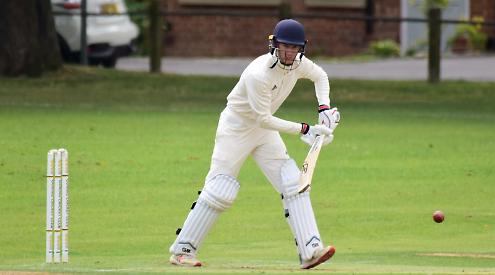 WOODCOTE were well on their way to victory in their Premier Division derby clash at home to GORING on Saturday when rain intervened and the result had to be decided by a Duckworth-Lewis calculation.

Woodcote won the toss and asked Goring to bat, and the decision looked as if it might rebound when Luke Gray (64) and Myro-Nel (26) put-on 83 for the second-wicket.

Olly Carrier (52) then added to the score, surviving a dropped catch on the way, and Goring finished their innings on 175-8. Pick of the Woodcote bowlers was Paul Knox (5-23) who, as well as dismissing Carrier, mopped-up most of the tail.

In reply Woodcote lost two wickets getting to 30, but then Ryan Van Heerden (50) and Paul Knox (49 not out) took charge, putting on 103 for the third-wicket. Knox was also dropped at a crucial point.

With the score at 138-3 after 22 overs the rain came. Had the game continued, Woodcote would have needed just 38 runs in 18 overs to secure the win and victory. As it was, the home side were confirmed as winners by seven-wickets.

U16 Nick Murdoch scored his maiden century and captain Matt Vines chipped in with one of his own as PEPPARD STOKE ROW 2nds climbed to third place in Division 1A following a 125-run triumph at home to STALLIONS.

The hosts were given a rollicking start as Jake Sedgwick (40) enjoyed his seasonal debut before Murdoch and Vines got to work.

The skipper smashed his way to 104 which included 12 boundaries and a quartet of sixes, while Murdoch brought up his first ton from the penultimate ball in a display of perfectly placed batsmanship before fellow teenager Harry Roberts blasted the last ball of the innings for a maximum to help Pepaprd post 280-2 from their 40 overs.

The hosts gave the new ball to left-arm spinner Taylor Vines, and the tactic worked a treat as he helped himself to 4-21. None of the away side’s batting line-up were able to truly get set, and with Vines’ fellow spinners Aled Roberts (2-42) and Jacob Lamsdale (2-7) also wreaking havoc in the middle and latter stages of the contest, the Stallions were bowled out for 155.

Elsewhere in the division, CHECKENDON’S home match with READING LIONS was eventually abandoned due to rain.

An opening partnership of 94 between Prashant Khare and Tommy Ellis set the hosts on the road a substantial total of 272-7. John Acland-Hood continued the good work with a run a ball 48 whilst Sam Arrowsmith only required 19 deliveries for his 39.

A rapid start to the visitors’ run chase left the game finely poised when rain halted proceedings with their score on 58-2 off 12 overs.

PEPPARD STOKE ROW 3rds conceded their Division 2 game at READING UNITED 3rds due to a lack of available players.

WOODCOTE 2nds went down to a narrow seven-run defeat at CROWTHORNE in their Division 3 clash.

Crowthorne won the toss and batted first, scoring 167-6 with the opening pair putting on 99 for the first wicket. Skipper, Jonny Aldridge (2-24) bowled economically as did Rakesh Patel (2-32).

In the second innings a good performances from Stefan Gordon (42) and Rakesh Nair (33 not out) kept Woodcote in contention but in the end they fell just short on 160-9.

Batting first, Checkendon were all out for 242 with Alex Stevenson top scoring with 88 and Rishabh Singh ending on 57 not out. In reply Flakland eased to 243-2 in just over 34 overs.