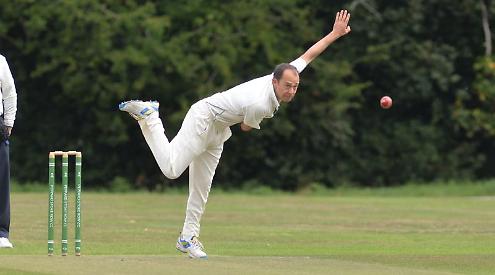 HENLEY 2nds moved up to second place in Division 1 after running out three-wicket winners at EVERSLEY last Saturday.

The home side, batting first, found themselves in trouble at 61-6 but rallied to add 107 runs for the last four wickets to close on 168. Freddy Loveland took 4-61 for the visitors whilst Sariam Ramamurthy and Sahil Desai both chipped in with two wickets each.

In reply, Henley reached their target in 39.4 overs, finishing on 169-7 with Charlie Homewood top scoring with 41.

Second-placed KIDMORE END closed the gap on the league leaders to four points despite drawing at BAGSHOT.

Manpreet Singh top scored with 68 and Ben Tegg chipped in with 66 as Kidmore End, batting first, were dismissed for 273.

In reply, Bagshot never kept up with the scoring rate but closed on 217-7 with both Aditya Chib and Matt Bolton taking two wickets each.

Elsewhere in the division, HAPRSDEN’S home derby clash with WARGRAVE 2nds was eventually abandoned due to rain.

Batting first the hosts had declared on 340-7 with Zac Jones hitting 135 and Duncan Verry 50. In reply, Wargrave were on 126-5 when rain stopped play.

A sensational spell from Sam Fooks and the continuation of stand-in captain Will Legg’s fine form with the bat at PEPPARD STOKE ROW helped the hosts to a nine-wicket win against HENLEY 3rds in Division 4A.

Having won the toss, Peppard asked the visitors to bat and made early inroads as Oli Sedgwick had both Hari Radhakrishnan and Prakash Gurung caught behind by Michael Chard. Henley skipper Rob Kenworthy (37) looked in good touch at the other end but the introduction of Fooks changed the course of the game.

After Owen Simmons removed Matt Donovan for 17, the next six wickets all fell to Fooks (6-32 from 12 overs), before Archie Malcolm accounted for Abdul Safi to leave Henley 156 all out. Andy Watts and South African teenager Kyle Tappan (26) gave the home side a solid base only ended when the latter inexplicably upper cut a Dan Lubbock bouncer to gully.

However, that was as good as it got for Henley as Legg hit 68 not out while Watts ended on an unbeaten 49 as the away side gamely stayed in the field despite worsening conditions as the rain swept in. Legg struck the winning runs to lead his side to victory in the 26th over.

Batting first Taplow ended on 244-7 with Simon French taking 3-52. In reply, Mark Richards hit 120 and James Newton 84 as Wargrave eased to 245-3. KIDMORE END 2nds moved to the top of Division 7A after beating NEWBURY 2nds by 72 runs in a rain affected match that used the average run rate method.

Division 8A basement side KIDMORE END 3rds went down to a narrow one-run defeat at ALDERSHOT 3rds.

Batting first, the home side put on 200-9 with Brjesh Kumar taking 3-31. Chasing their target Kidmore End ended just short on 199-7 with James Spruyt top scoring with 56.

Batting first, the visitors put on 238-4 with Achint Rajeev top scoring with 75 not out and Freddie Meader hitting 66. In reply Chesham ended on 186-9 with Guy Fergusson taking 3-13 and Atul Pawar 3-52.