Searle hits winning runs as side return to winning ways 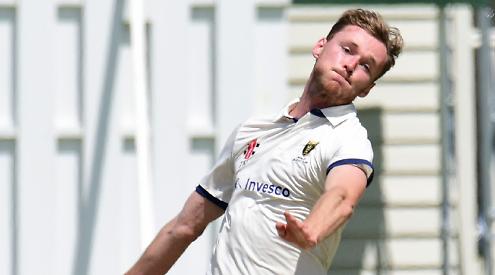 IN a game that defied the rain, HENLEY got back to winning ways with a four-wicket victory against winless and bottom Home Counties Premier Division 1 club, BUCKINGHAM TOWN, thereby moving up a couple of places in the table last Saturday.

Winning the toss, the visitors elected to bat, with rain falling as the players took to the field. The umpires peered skyward and a brief delay ensued.

A couple more rain breaks further disrupted progress and reduced the overs. This did not inhibit Tom Nugent’s capacity for wicket taking, Wells caught behind and Cox caught by Brock at third slip. Otherwise the rate of scoring on a good deck that held few demons was slow and at lunch, the visitors were 45-2 off 21 overs.

It took them to the 43rd over to pass 100, and by then, only two wickets remained. Nugent cleaned up Price, Harry Jordan bagged a pair, Brock taking a catch at backward point to remove the most durable Bucks batter, Leigh Tomlinson, and Adam Searle holding on to a King skyer.

Nugent turned to spin and Declan Farland and Seale accounted for everyone else leaving Henley with the modest task of scoring 110 runs.

This was a day for the dedicated connoisseur. The weather, sub-tropical the day before, felt like winter as players and spectators donned anything that might afford greater warmth.

Matt Rowe was out LBW first ball to the wily Lahiro Gamage, a Sri Lankan seamer with five Tests to his name, and Mike Roberts soon followed, a pull shot backwards of deep square leg well taken by Price. That made it 10-2 which became 31-4 as Liam Hilditch and Brock each struck graceful boundaries and then checked out to Price.

At the top end, Johnny Connell remained in post and was joined by Stewart Davison. Between them, they mustered another 35 runs before Connell played the same shot as Roberts and Price took an even better catch.

Rain intervened but when play resumed, a rather ordinary ball from Price induced a top edge and Nugent was out, 77-6. On strolled young Searle, whose diffident mien belies steely determination and a good eye.

He and Davison chipped away, finding the boundary with style when they could, before cutting loose in Price’s last over (the 32nd) which yielded 16 runs and left Henley just two short of victory. The now hobbled Gamage charged in for his 17th over and Searle (19 off 18 balls, four fours) despatched the second ball through the covers and that was that.

In truth, nothing less than the win would have done but on a day when rain led to three drawn games and new leaders Datchet chased down Aston Rowant’s 242 in just 35.2 overs, Henley did their cause no harm.

Due to variable form, a change in the allocation of bowling points this year, and no one club setting the pace, nothing separates the top eight places.

Speaking after the win, Nugent said: “It was good to get back to winning ways. I thought we bowled very well to restrict the score. We perhaps made the chase a little more difficult than it needed to be, but great knocks by Connell, Davison and Searle got us over the line.”

Tomorrow (Saturday) Henley are at home to newly-promoted Wokingham.