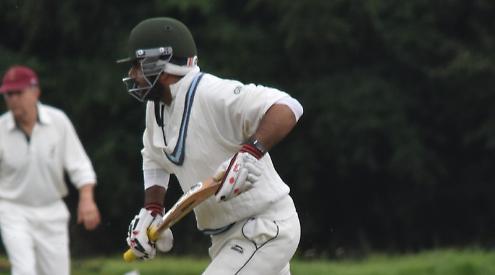 West Wycombe won the toss and asked the visitors to bat first and Greys made a tentative start losing both openers for 12 runs. This brought Ahmed and Singh together and their stand of 118 enabled Greys to steady the ship and then to flourish. Barkhart Ahmed made 73 with Singh hitting 38 in support.

Greys then lost three quick wickets and the innings was in danger of losing momentum but some good counter-attacking batting from Skilleter (26) and Darby (20 not out) guided them to a final score of 187-6. Darby posted his best score for the club for the second time in successive innings.

West Wycombe began their response in positive fashion with openers Chia-Croft and Castle putting on 44 for the first wicket. But the fall of three quick wickets halted their momentum and at 59-5 their chase was effectively over.

After that their lower order dug in to secure the draw and ended on 86-7. Greys used six bowlers to try and break through with Singh the pick, his nine accurate and hostile overs yielding 4-20.

HAMBLEDEN went down to a 90-run defeat away at HADDENHAM.

Having won the toss, Haddenham decided to bat. Ary Paul opened the bowling with the wind behind him, only for Henry Morris to hit three boundaries on a quick outfield, setting the tone for the rest of the innings.

Bowling into the wind, Rafe Dickie had a good spell, eventually taking the wicket of Josh Towellon (12), clipping an inside edge onto the stumps.

Dan Loughlin joined Morris and the pair hit a partnership of 79 to reach 100, before Loughlin was caught on 27, at mid-wicket by Adam Gayton off the bowling of Chris Sanders.

Hambleden dropped too many chances over the next 10 or so overs, Puttur having joined Morris, and both eventually retiring, Puttur on 54 and Morris on 117.

Nick Arnold bowled five overs before replacing himself with Dave Holloway but it was Delaney Hanson who finally brought some relief, bowling Paul O’Prey on one, and S Smith for a duck on two successive balls in his final over.

On the final ball of the innings Hambleden took a fifth wicket running out Brandt for seven, his partner Dashput finishing on one not out. Haddenham finished on 218-5.

Where Hambleden had taken one catch, Haddenham held almost every chance. Gayton fell on four caught at mid-wicket off Kench followed three overs later by Phil Rosier on 17, caught at point off Pickering. Pickering collected his second wicket when Matt Murton, on 10, clipped one up to first slip. Towell replaced Pickering and took his first wicket of four, having Holloway caught on one at mid-wicket.

In the 18th over Puttur caught Sanders on nine off his own bowling. Hambleden were now 84-5, halfway through their innings. Throughout this Hambleden’s linchpin had been Dickie who hit 62 before becoming Towell’s second victim in the 23rd over.

Arnold faced two balls from Puttur before being caught at mid-on. Towell’s third wicket was that of Hanson caught on 12 with the score 123-8. Puttur’s next over saw four byes scored between Ary Paul and Paul Richards, then in Towell’s final over, Richards was caught at square leg by O’Prey.

In Puttur’s final over Ary Paul hit a single and Graham Jackson survived the only dropped catch by Haddenham’s keeper, only to be bowled soon after, Hambleden finishing on 128 all out and losing by 90 runs.

U14 Dan Guest made his maiden senior half century as PEPPARD STOKE ROW UNICORNS beat a similarly youthful HENLEY HERCULES side by 96 runs.

Rowan Garfath-Nebbett proved the pick of the visiting attack with 2-25.

Despite losing an early wicket, Henley batted well in reply with Oliver Saunders (51 retired) and Bob Boomer (50 retired) both among the runs.

However, it was always going to be a tall order to chase the Unicorns’ target, and Hercules eventually closed on 200-3.

A Dave Lambert half century ultimately proved in vain as PEPPARD STOKE ROW MAHARAJAHS were beaten by seven wickets with five balls to spare at home to EWELME AND BENSON.

Youngster Louis Taphouse again showed up well at the top of the Maharajahs order in making 26, but it was Lambert’s 52, aided and abetted by 38 from Jason Evans, which helped their side post a competitive 201.

Ewelme batted solidly in their reply, and despite father-and-son duo Aled and Max Roberts snaffling a wicket apiece, the away side reached 202-3 to seal the deal.

Visitors CRAZIES HILL AND COCKPOLE GREEN ran out winners by five wickets in a close encounter at HURLEY’S Shepherd’s Lane.

On wining the toss, the visitors invited Hurley to bat first in a 35 overs per side contest. Hurley suffered an early loss when Mubashir Nabi was bowled round his legs by Andrew Searle with the score on nine before Pat Hinnell retired hurt with a hamstring strain.

Shoaib Kayani (34) and Haider-Ali Baig pushed the score along to 115 before Kayani was out lbw to the leg-spin of Berkley. Baig continued his recent run of form with 79 from 81 deliveries before chipping a return catch to Charlie Montgomery.

Crazies Hill openers Norton and Berkley got their side off to a solid start with an opening partnership of 37, ended by Mo Basharat who had Norton (22) caught at mid-off by Hamzah Zaman.

Berkley (76) and Zoravar (70 not out) kept the scoreboard ticking at the required run-a-ball with a second wicket partnership of 112. Two wickets each for Nigel Haines and Hamzah Zaman kept Hurley in the match while the economical Baig, conceding only 19 from six overs, helped keep the pressure on the batsmen.

Cole and Ajmal could not exert the same control for the hosts and with five overs remaining and 24 required the visitors were favourites.

Skipper Doug Montgomery put the match beyond doubt with a boundary and a maximum off the 33rd over, leaving only five more to win from two overs. It only took Zoravar another three balls to get his side past the winning post, finishing the match with a boundary off Zaman.

TURVILLE PARK ran out winners in their home clash with VICTORIA AND ALBERT.

Turville lost the toss and were asked to field. Opening bowlers Jon Crook and Piers extracted bounce and movement from the dry surface and after 14 overs, a slip catch, a gully catch and a diving catch at extra cover saw the visitors to 60-3.

Charlie Hunt then took 2-30 as all 10 outfield Turville players bowled as the visitors ended on 199-8.

Turville’s opening pair of Bucknell and White hit 21 runs off the first two overs before White departed for 12.

Hunt junior joined Bucknell and the score raced to 50 with Bucknell targeting lofted strikes over the off-side.

Hunt junior soon went on the attack, racing ahead of his partner who fell for a 60. Hunt went on to become the youngest Turville player to hit back-to-back centuries as the hosts needed just 20 runs off the last four overs.

The home side’s middle order of Sturt, Kertesz and Morton got Turville over the line with five balls remaining.