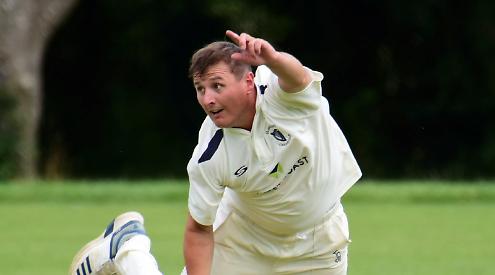 VISITORS BOYNE HILL leapfrogged HENLEY 2nds into fourth place in the table after running out nine-wicket winners at the Brakspear Ground on Saturday.

Having won the toss and electing to bat, Henley found scoring runs hard to come by with number four batsman Oliver Buckle top scoring with 18. When Buckle was bowled by Prashant Kumar Henley were reeling on 40-6 and eventually were all out for just 79. In reply Boyne Hill eased to 83-1 to secure victory.

The home side, who won the toss and elected to bat first, put on 237-8 with Mayank Kedia top scoring with 68 whilst Jack Clark took 5-79 for Wargrave. In reply Wargrave were all out for 109 with Vipin Taliyan taking 4-28.

The home side, batting first, were dismissed for 221 with Zac Jones taking 5-57. In reply, Vernillius Gabriel top scored with 54 not out as Harpsden reached 222-6 to win the match. A fine all-round performance from PEPPARD STOKE ROW helped them overcome previous Division 4A leaders WOKINGHAM 3rds by eight wickets, elevating themselves to second in the table with six games to play.

Economical opening spells from Scott Harris and Owen Simmons kept the hosts in check after they chose to bat, but it was the introduction of Peppard leading wicket-taker, Sam Fooks (3-34), which heralded a collapse from 40-0 to 77-4.

Despite opener Craig Rintoul top scoring with 41, there was little else to get the Wokingham innings going, and with Chris Humphreys (4-20) working his way through the middle and lower orders, the home side were dismissed for 166.

The youthful opening pair of U15 Connor Lamsdale and fellow teenager Kyle Tappan gave Peppard a solid and brisk start until the former was trapped lbw by Hugh Doyle for 45.

Dan Hayden came and went quickly, but Tappan (61 not out) and fellow South African Kirk Graham (49 not out) made no mistake in ushering their side to victory with more than 18 overs remaining. Elsewhere in the division, HENLEY 3rds went down to a four-wicket defeat at home against COVE 2nds.

Batting first, Henley were dismissed for 130. In reply A Lubbock took 5-25 but Cove 2nds reached their target of 132-6 to take the honours.

In Division 5A, WARGRAVE 3rds lost out by seven wickets at home against WRAYSBURY 2nds.

The home side, batting first, were all out for 171 before Wraysbury eased to victory by hitting 172-3.

KIDMORE END 2nds remain top of Division 7A after running out four-wicket winners at HURST 2nds.

KIDMORE END 3rds remain rooted to the bottom of Division 8A after going down to an eight-wicket home defeat against BRACKNELL 2nds.