Acland-Hood’s ton in vain as Stallions have the edge 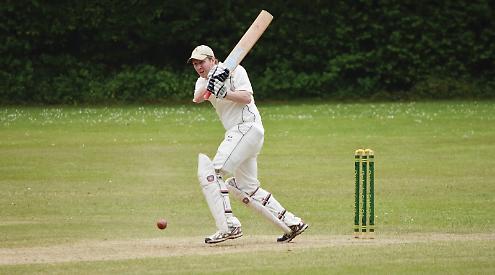 On a difficult wicket, West Reading were all out for 157 in 35 overs, but a fine opening spell from Olly Nicholson, whose eight overs included three consecutive maidens, and Keegan Shepherd (4-26) helped to reduce the home team to 36-3, but they made a good recovery to set a challenging target.

The West Reading bowlers never allowed the visiting batsmen to settle and Woodcote were bowled out for 59 in under 20 overs. Paul Knox (17) was the only Woodcote batsman to reach double figures.

Elsewhere in the division GORING went down to a 101-run defeat at home against league leaders MORTIMER WEST END.

The visitors, having ton the toss and electing to bat, put on 280-4. In reply Goring were dismissed for 179 with Navneet Singh Chawlea top scoring with 65.

PEPPARD STOKE ROW 2nds were edged out by two wickets with just two balls remaining in their home Division 1A clash with BERKSHIRE ROYALS.

Despite losing Andy Watts cheaply, Gerry Bacon (46) and U14 Rudi Derbyshire steadied the ship, before another youngster, Harry Roberts (38) continued the momentum.

Derbyshire eventually fell for 77, and with a couple of useful cameos towards the back end of the innings, Peppard ended their 40 overs on a competitive 226-7.

Royals started their reply steadily before Archie Malcolm trapped Mohamed Khan lbw, Danny McAlister then accounting for Shamil Nilamdeen courtesy of a fine catch in the gully from Roberts.

Shukry Shakoor and Arshad Kaffar helped rebuild for the visitors, but two Tom Mennie catches — the second a stunning effort at backward point to remove the latter for 65 — helped keep Peppard in the hunt.

Derbyshire (3-35) then put his side in pole position as Royals were reduced to 185-7, but a late flurry saw them creep home and secure a sixth consecutive victory.

Elsewhere in the division, CHECKENDON went down to a 20-run defeat away at STALLIONS.

In reply, Checkedon ended their innings on 289-7 with John Acland-Hood top scoring with a century of his own in a hock of 117 not out whilst Rahul Singhal chipped in with 57.

Crawford Anderson, a Woodcote opening-bat since 1976, took the batting honours with an unbeaten 35 as WOODCOTE 2nds made short work of EMMBROOK AND BEARWOOD 3rds in Division 3. His score was matched by skipper Jez Mayo (35 retired not out), in an opening partnership of 81 which saw Woodcote to victory in 20 overs. Stefan Gordon (17) joined Anderson to see the home team over the winning line.

Having won the toss and electing to bat first, Checkendon put on a huge 330-4 with Abhinav Kaurav (105) and Saurabah Goel (102) hitting centuries and Rishabh Singh chipping in with 56. In reply, Earley were all out for 99 with Viral Khamar taking 3-11.