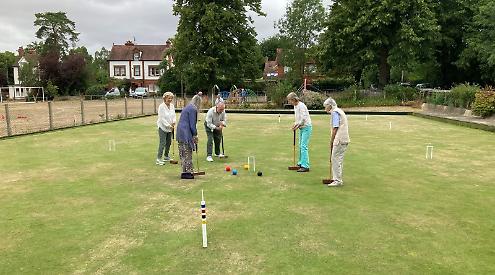 A CROQUET player in Goring has urged the parish council to reverse its decision to allow the village cricket team to use the bowling green for training.

The authority made the decision in March when after the bowls and croquet clubs said they would move from the Gardiner recreation ground to the Goring Heath almshouses site instead.

The bowling club has been given permission to continue using the current green until the end of 2023 before work on the cricket club’s new facility begins.

Goring Cricket Club wants to replace the existing nets with a new training facility for use by its academy, which now teaches cricket to 250 children and young people.

It currently has two nets but wants to build four of a higher standard, subject to planning permission.

Goring Bowling Club merged with Goring Heath Bowls Club in 2019 due to declining membership and had planned to move to the latter’s green at the Goring Heath almshouses. But after work to re-lay and level the green was delayed due to the coronavirus pandemic and the cost had risen from £17,000 to £24,000, the club has decided to stay put.

The council has given the bowling club until the end of next year to find an alternative home. One suggestion has been Sheepcot recreation ground but the club says that’s not enough time to get planning permission and raise enough money to complete the work.

Derek James, 79, a croquet player who lives in Goring, urged the council to think again at its meeting on Monday.

He said: “Four months ago the council made the decision to allow the cricket club to take over the bowling green at Gardiner’s Field.

“Since then, there have been material changes. The alternative site for the bowling club is no longer available, meaning that the club either continues to exist at Gardiner’s or it doesn’t exist at all.

“The proposal to use Sheepcot as an alternative is, in my opinion, pie in the sky. It could never be ready in 18 months’ time and would be hugely expensive.

“The cricket club say the bowling green is the ‘optimal location’ for the cricket nets. For bowls and croquet, it is the only location.

“My question to the council therefore is: will you change your earlier decision because the facts have changed?”

The following discussion was lively with almost all the parish councillors having a say.

Councillor David Brooker replied saying there are “lots of strains” to the issue that need to be explored, not just the relationship between the bowls and cricket club. He said: “In my opinion, we need to go through it all.”

Councillor Bryan Urbick, who chairs the council, said: “We have made a commitment based on the information we had, to the cricket club, and it would seem to be most astute that we try to handle this.

Councillor Lawrie Reavill asked if it was possible to review the provision of the cricket nets in another location.

But Cllr Urbick said they had asked about this but was told that the modern nets could only be used in the area taken by the bowling green.

An open spaces review was supposed to have been presented to the council, but illness has led to its delay and it will now be ready at the end of August.

The council said it would be key to determining the possible solution to the three-sport dilemma.

The council agreed to wait until the open spaces report had come in and to then undertake a feasibility study into a move to Sheepcot in terms of cost and timescale.