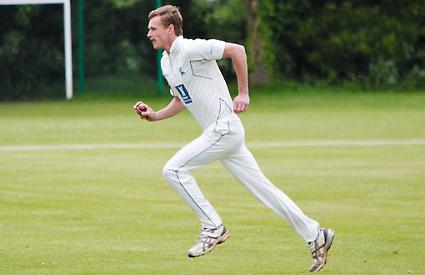 In their first competitive game of the season, reigning Home Counties Premier League Division 1 champions HENLEY came off second best against a BANBURY side that was simply superior in all departments.

Winning the toss, Henley elected to bat on a warm, slightly breezy morning at Banbury, and found the going tough from the start as the home bowlers made the most of a slow wicket.

With the ball not coming on as they would like and the odd one keeping low, Henley openers Michael Roberts and David Barnes struggled for runs as the Banbury bowlers kept their discipline and bowled good areas.

Barnes departed early lbw to a ball that kept low and his replacement, Australian Ben McDermott, found himself pinned down and the paid the price for going down the track to Ryan and getting stumped for his pains.

The arrival of Euan Brock at the crease signalled the start of the most fruitful partnership of the day (63) as both Roberts and Brock grafted away and kept the scoreboard ticking along with some good running between the wickets before Brock was adjudged out lbw to Banbury skipper Phillips.

This was the beginning of the end as Henleys middle order failed to deliver as they slumped from 97-3 to 159-8.

Dave Allaway was out lbw sweeping, skipper Bjorn Mordt holed out to extra cover on the drive, keeper Steward Davison was trapped lbw by Ryan and a not fully fit Matt Carter was caught at mid-wicket after a couple of lusty blows.

In between Roberts, who had ground out 56, freed his arms for a trademark pull shot that came up short, caught by Blanchard at deep square leg off the bowling off West.

Henley needed Roberts to stay in to the end to post anything like a viable score and for a time it was doubtful that Henley would either get past 200 or see out their overs.

In the event Tahir Afridi, ably supported by Tom Nugent, took on West and Bartlett to good and entertaining effect to see Henley past both milestones and to give the bowling department something to bowl at. A 209 target seemed short of a par score.

Afridi and Nugent were once again the main men as Banbury began their innings quite tamely. Sabin was an early Nugent victim caught behind and Nugent would double his tally as Haupt was caught by Carter at mid-on.

It was the arrival of Nathan Hawkes that turned the game on its head. The wicket seemed easier to bat on as the day wore on and the sun beat down as Hawkes and opener Harris took the Henley bowling apart, smashing Mordt, Brock and Carter around and out of the park.

The hapless Brock went for 22 to Hawkes off his first over, Mordts four overs went for 28 and Carters four for 34.

When Harris was out, stumped off Singh, Banburys keeper, the in-form Cater kept the pressure up with an unbeaten 28.

Carter, down on pace with an injured ankle and sporting two cracked fingers, should not have been playing and could be excused for dropping a Hawkes skyer off Singh when the batsman was on 60 odd.

Singh too could also claim a couple of broken fingers and ought not to have played, but his figures of 1-37 off 10 overs were impressive in the circumstances and he might have had a couple more wickets had Carter taken his catch and Davison held on to a catching chance from Harris.

Hawkes brought up his century with some style and saw out the game with the last couple of boundaries of the day off Brock to seal victory with almost 10 overs remaining.

All in all, a bad day at the office for Henley and one which laid bare a misfiring middle order.

These are early days in the 2014 campaign and there is plenty of scope to turn things around, but Henley can be heartened by the fact that they are now possessed of several batsmen in the second team more than capable of playing Premier League cricket and challenging for places.

Furthermore, the wisdom of fielding injured players is questionable when they will not recover without rest and may in fact prolong and exacerbate their injuries.

Banbury meanwhile, who have not won the Division 1 championship since the inaugural year in 2000 are showing the sort of cohesion, balance and self-belief that wins titles.