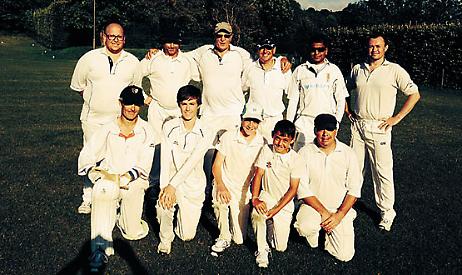 HAMBLEDEN eased to victory in their derby clash against MEDMENHAM at The Dene on Sunday.

Electing to bat first Hambleden lost opener Nick Arnold in the first over and looked to be in trouble after number three Ash Singh went with the score on 55 followed quickly by two further wickets.

Accurate bowling by Medmenham’s Steve Baxter, who returned 3-10 off eight overs, pegged back the Hambleden charge. The Hambleden innings was anchored by opener Phil Rosier who went on to make 88 and by number six batsman Andy West who made 26 before being caught and bowled by Phil Baxter.

After Rosier went, a late flourish by Adam Richards who added 11 supported by 13-year-old Ben West and then his 10-year-old brother Harry West saw the Hambleden innings close on 188.

The Hambleden bowlers quickly set about the Medmenham batting line up with a deadly opening spell by Ash Singh who returned 4-14-8 and young Adam Richards with 3-24-8.