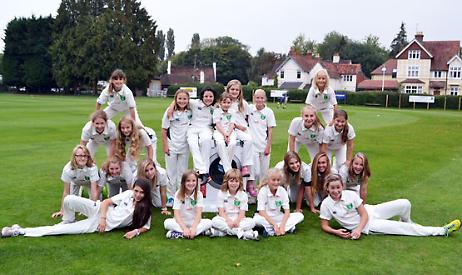 HENLEY Cricket Club’s junior girls’ teams need your vote for the chance to win tutoring from an England cricketer.

The club’s two junior girls’ teams have reached the finals of a competition run by home appliances company AEG. They are one of 20 teams nationwide to win a washing machine for the Brakspear Ground pavilion and brand new Canterbury kit.

The next stage will see them upload a photo of themselves on to the AEG Facebook page and the public will be able to vote for their favourite team. The overall winners will receive a coaching session from an England cricket star. Damaris Hayward, manager of the Henley junior girls’ teams, said: “I am so pleased that the girls came in the top 20. I think we are the only team in Berkshire and Oxfordshire and the only girls’ team to be picked.

“We are really excited to be in the running to get an England player to come down. To have someone from the England men’s team would be amazing.”

The girls’ teams started three years ago with just six players and now they have 30 girls registered.