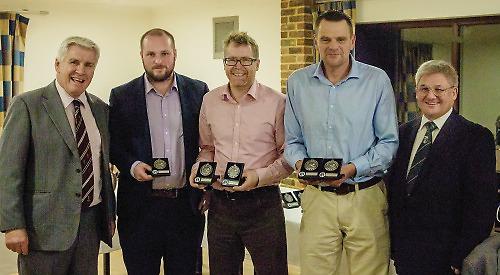 PEPPARD Stoke Row players were amongst the award winners at this year’s Wintech Berkshire Cricket League dinner held at the Goring and Streatley Golf Club where West Reading’s were crowned champions.

Awards were presented by Nick Cousins, who heads the ECB Association of Cricket Officials and is a former Gloucestershire player and international rugby referee.

Local clubs and individuals were well represented and received awards during the evening. Peppard Stoke Row Cricket Club had the distinction of finishing runners-up in three divisions: the 1st XI in the Premier, the 2nd XI in Division 2 and the 3rd XI in Division 4. Dan Hayden, vice-captain of the Peppard Stoke Row first team was named league batsman of the year, having scored 807 runs for an average of 89. There was also a young player of the year award for 14-year-old George Lee who played in the 3rd XI and a special mention for 2nd XI player, Danny May, who scored a century against Earley.

There was also an award for the league secretary and chairman of Woodcote, Sam Peates. Peates received the Peter Tyler Award as panel umpire of the year in the Premier Division after receiving 16 ‘excellent’ grades from team captains.