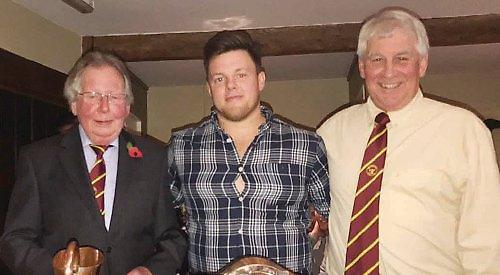 WOODCOTE Cricket Club held their annual awards evening at the Highwayman on Saturday at the end of the club’s 136th season.

There was a good attendance to celebrate a successful season of league and friendly cricket. Chairman, Sam Peates welcomed the guests and announced the winners of the many club trophies. President, Pete Aldridge presented the trophies and Carol Quinton was there to present the Christopher Quinton Memorial Cup.

It was a particularly good year for Micky Molloy in his first season with the club. He won the Jack Hatt Cup as the leading batsman, having scored in excess of 600 runs, he was the midweek player of the year and the top wicketkeeper. To add to these he was also presented with overall awards in the shape of the Pat Lee-Mace Jug and the Centenary Trophy.

Fifteen-year-old Ben Danks won the Martin Smith Cup as young player of the year for his performances in the Sunday XI and Crawford Anderson, a regular player since 1976 and the club secretary was presented with the Christopher Quinton Memorial Cup for long and active service to the club.

The President’s choice for his own trophy was his son Jonny Aldridge for his commitment to the club as Sunday captain and as club groundsman.