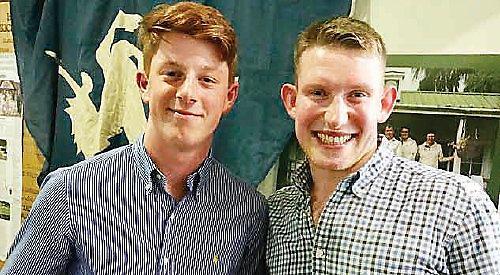 HENLEY Cricket Club players made it a clean sweep when Berkshire handed out their 2016 awards.

The Palmer Cup for the player of the year was shared by wicket-keeper Stewart Davison and pace bowler Tom Nugent.

The awards were presented at Berkshire’s annual dinner held at the Henley club last Friday.

Two of the recipients were unable to be there, as Nugent is playing in Australia and Davies had school commitments. Both were represented by their fathers, Ian and Andrew.

Berkshire had much to celebrate, as they are the Western Division and overall Unicorns Counties champions, having beaten Lincolnshire in the national final played at Wormsley in August. They have now gone two seasons without losing a championship game.

In speeches at the dinner, director of cricket Danny Hall, skipper James Morris and club professional Chris Peploe all heaped praise on head coach Tom Lambert. Hall said he was, without a doubt, the best coach in minor counties cricket.