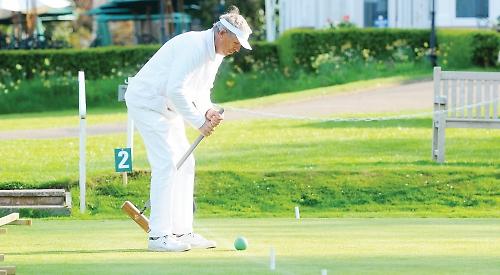 ROBIN COATES had a dream start to his golf croquet league team career last week when he won both his singles matches, and one of his doubles, as Phyllis Court Club C chalked up another victory to continue the fine start to their league campaign.

Visitors Harwell held the C team to 7-5 and provided them with their toughest challenge to date but, with three wins from three, the hosts consolidated their position at the top of the Southern Federation Handicap League table.

Coates, who only started playing croquet 18 months ago was on a high after success two days earlier at the original form of croquet, now known as association croquet or AC.

He won the junior event at Phyllis Court’s internal singles tournament and, along with Peter Haydon who was victorious in the senior event, ensured that there will be two new names on the Barnses Cups this season.

Phyllis Court had more good news from the AC game, when Richard Peperell won four out of five games to win the handicap tournament at High Wycombe last weekend.

This is encouraging news for this version of the sport that has seen its number decline in recent years, in contrast to the growing trend towards golf croquet that has been seen locally and nationally.