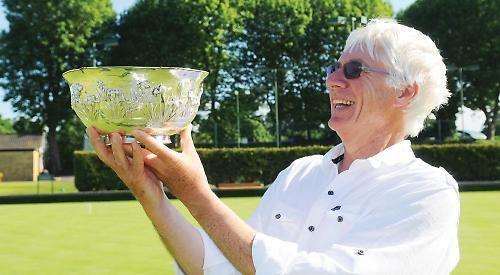 PHYLLIS COURT won both the doubles and singles handicap events at the famous Roehampton Club in South London last week.

Firstly, Raghu Iyer teamed up with former Phyllis Court member Harry Midgley to win the doubles which was Iyer’s first tournament win away from his own club.

The pair won all five of their games to lift two matching silver chalices, which were previously won by Frances Colman and Chris Roberts (also in this field) in their first outside AC tournament in 2011.

This was followed up by the in-form Richard Peperell, who was also unstoppable over the next two days and also emerged unscathed, with five wins out of five to win the singles event. Further afield, Helena Fensome played under her Finnish flag in the European Golf Croquet Championships in Cadiz and Seville, Spain last week.

Fensome found the competition tough going and missed the cut for the main knock-out, so had to be content with a 50 per cent winning ratio in the plate event.

Meanwhile, back at Phyllis Court, the B side recorded their first win of the season, 7-5 against Wingrave, but did it the hard way as they let a strong lead slip in the last round of singles.

It all boiled down to captain Raymond Wood’s last game to finish, and that went to the final 13th hoop where, after much placement and clearing inter-play, the Phyllis Court man prevailed.