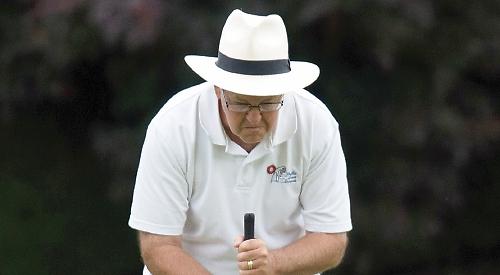 PHYLLIS COURT’S Chris Roberts was on song last weekend at Cheltenham where he hit everything to win the top ranked open championship.

The win gives him a converted automatic entry into the end of season English National Singles Championship for the Ascot Cup.

Roberts dropped only one game on his way to a final showdown with Ian Burridge who holds that national title. In the final the Henley man’s high percentage clearances earned him a 7-4, 7-4 victory and the most prestigious title of his career.

This win for Roberts was the ideal preparation for this week’s Golf Croquet British Open at Surbiton, where for the first time four Phyllis Court players are in the line-up.

Joining Roberts will be Roger Goldring, Helena Fensome from Kingwood Common and Peter Haydon as they take on at least eight international players including two current world champions.

Phyllis Court players were in county action at both association and golf croquet last week.

In the former style of game, Roberts played in all four days of the AC Inter-Club Championship to help Oxfordshire to a mid-table Division 2 position at Southwick, near Brighton.

However, there will be no championship outing for the county team at golf croquet this season as Charlie von Schmieder, Ian Norris and Helena Fensome failed to get past the qualifying event for Oxfordshire at Surbiton.

There was team action this week as well for Phyllis Court when their golf croquet B team triumphed 7-5 at Harwell. The win moves the side up to third in the league behind the club’s table-topping C team.

There was no such joy for the Phyllis Court association croquet handicap team, who lost three games by a single point to visitors Hurlingham who enjoyed a 7-1 win in a friendly match.