Coates and Colman win back trophy 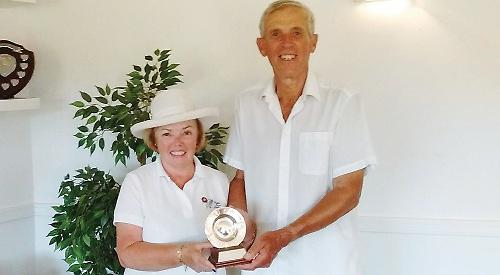 The experienced hand of Colman guided the new man Coates throughout but he played his part too with some deft strokes and completing a four-hoop break with guidance.

This victory for Colman and Coates at Hamptworth, near Salisbury, sees the Armada trophy return to Phyllis Court for the first time in three seasons.

Colman now has the unique achievement of having won the Armada Trophy four times — she was also victorious partnering Chris Roberts in 2011, 2013 and 2014.

Phyllis Court C dropped only one game to thrash visitors Dogmersfield 11-1 to cement their place further at the top of the Southern Croquet Federation Handicap League North.

There were only occasional highs amid a sea of lows for Phyllis Court’s largest ever representation at the Golf Croquet British Open last weekend.

Chris Roberts had been seeded to reach the mid-point ‘cut’ after the block games stage but could not quite recover from a poor first day and finished on six wins, one short for the qualifying number for the Championship knock-out.

Roger Goldring, Helena Fensome and Peter Haydon all had their giant-killing moments but otherwise they found the standard of the opposition tough going at Surbiton.