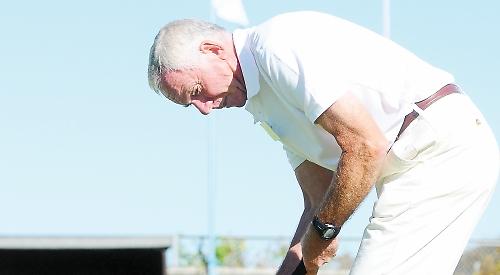 PHYLLIS Court A found Dulwich too strong in the National Inter-Club Championship quarter-final last week as they slumped to a 6-1 defeat.

Ian Norris secured Phyllis Court’s only match win, his ball placement precision coming into its own on the host’s dry and fast courts where controlling the ball was difficult.

There were only patches of success elsewhere with Chris Roberts getting one game in three off England international Lionel Tibble and both David Hopkins and Carol Jackson also taking matches to deciding games.

On Monday Phyllis Court A bounced back from the cup disappointment to keep their Southern League title hopes on track with a 4-3 win against Winchester.

Roberts increased the lead for the Henley club with a straightforward win in his singles rubber and Goldring’s second win of the day secured the match result.

Phyllis Court have a tricky away match at Ryde on the Isle of Wight on Monday, where victory will set up a title deciding match against a resurgent High Wycombe team.

In the handicap league, Raymond Wood’s Phyllis Court B side blew away visitors Dogmersfield 10-2, extending their unbeaten run to four games.

With only one fixture remaining, the divisional title is now beyond them, with the cost of two early season defeats now being all apparent.

For the first time ever, Phyllis Court were represented by no less than five players at the AC National Seniors Championships at Budleigh Salterton in Devon last week.

Carole Jackson out-performed her seeding in the A Class, Chris Roberts threw away a last game chance to win the B Class, and the trio of David Hopkins, Frances Colman and Richard Peperell all recorded some good wins in other classes.

The rapidly improving Peperell impressively achieved a third handicap reduction of the season.

The same history mark will be made in the golf croquet code next week when, again for the first time, there will be five Phyllis Court players in the starting line-up for the GC National Seniors at the Sussex County club near Brighton.

Hopkins and Jackson will be in action again, joined by Roger Goldring and both Helena and Mike Fensome.