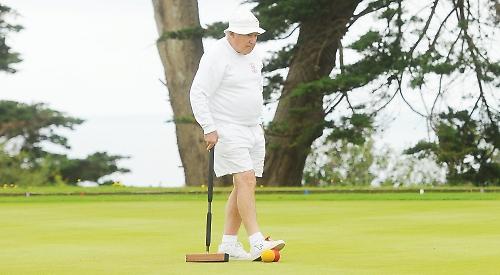 Both can still win their respective leagues but can’t afford any more slip-ups.

Phyllis Court A let a half-time lead slip at Ryde on the Isle of Wight, Carole Jackson and Roger Goldring each won their morning singles matches in straight games while Chris Roberts and David Hopkins went down 6-7, 6-7 in their doubles match.

Jackson and Goldring then swapped opponents but Ryde rallied unexpectedly and won both rubbers, putting the pressure on Hopkins and Roberts to win both their singles rubbers to save the day.

But it was not to be and a jump shot at the last hoop did for Hopkins, so that by the time Roberts won his match the fixture was lost 3-4.

The A team can still win their league but now require victories in both their remaining two matches against Blewbury and High Wycombe, with the latter looking like being a title decider.

In the handicap league, Raghu Iyer’s undefeated Phyllis Court Club C team suffered a shock 10-2 loss to Wingrave at Leighton-Linslade’s ground in Hertfordshire, where the Henley side were unsettled by some uneven and patchy courts.

Wingrave coped with the conditions better than the C and they chalked up an impressive win.

The C team must now win their last game of the season at home to Blewbury to top their division and reach the handicap final.

Hopkins’ form was good throughout the early block games stage and he rattled up eleven victories in 15 games at the Sussex County club near Brighton. Roger Goldring also qualified for the championship knock-out stage but he made his exit one round earlier that his team mate, while Phyllis Court’s other participants Carole Jackson, Helena Fensome and Mike Fensome, contested minor places.

There was an unusual outing for Phyllis Court’s Peter Haydon last week when he reached the quarter-finals of the Belgian Open, which was unexpectedly played at Ramsgate this season.

Joann Iyer won Phyllis Court’s inaugural 8+ singles tournament which was a close run thing with three players all ending with an 80 per cent winning rate.

Not all of the ties played had faced each other, so a number of hoops scored tally couldn’t be used as a tie-break, so the manager utilised a seldom used quality of opponents criteria which went narrowly in Iyer’s favour ahead of Madeleine Probert and Michael Christmas and debutant Tony Peperell.

In addition to winning this tournament the top available finishers get to represent Phyllis Court at the Grass Roots 8+ event at Nottingham in September.