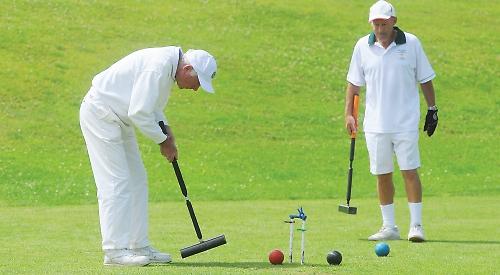 WORLD Association Croquet champion Stephen Mulliner may not have heard of Phyllis Court’s Ian Norris before last weekend but he won’t be forgetting him in a hurry now.

Norris was easily the Henley club’s best performer at last week’s Wiltshire Open where he capped a fine weekend by taking a game off Mulliner in his semi-final.

Unperturbed, the senior man duly won the best of three decider and went on the win the tournament but Norris’s game win was more unexpected than the 50 ranking places that separated the two players would have indicated.

Norris’s first sport is golf, at which he holds a single figure handicap at Henley Golf Club, so he is a less frequent player than most of the croquet players at this English championship level.

The outing at the Hamptworth club near Salisbury was Norris’ only championship qualifying event of the season and his fourth place finish — a personal best — puts him on the cusp of qualification for the prestigious English national singles finals event at Nottingham next month.

Phyllis Court club mate Chris Roberts, who is already in that finals line-up thanks to his May tournament win at Cheltenham, underachieved at the Wiltshire with a ninth place finish, while Peter Haydon, Helena Fensome and Mike Fensome all contested lower places.

There was no rest for the Phyllis Court quintet who had attended the Wiltshire open as all were back in action the following day, contesting their internal open singles top event. Norris was curiously out of sorts after his weekend’s achievements and top seed Roberts came through with only one loss in six games to end up the clear winner of the Blue Ball trophy.

Roger Goldring, who had played in the Ipswich Open the day before, was runner-up and Peter Haydon third, both one win adrift but with the satisfaction of seeing their handicaps reduce to 0 and one respectively during three days of action.

The surprise package of the event was Robin Coates who won the alternative prize for the most index points won during the event and proved to be a veritable banana skin for two of his much higher ranked opponents.

On the team news front, Phyllis Court B competed their league programme with a disappointing 8-4 home defeat to High Wycombe, and with it, they relinquished third place in the division to the Bucks club.