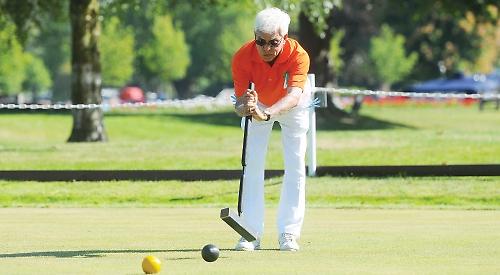 FOR the second year running, Chris Roberts and Roger Goldring have caught the Croquet Association selectors’ eye, and will be appearing in the ‘first and second eights’ selection events this weekend.

This is a feather in the cap for Phyllis Court as the eights sit third in the hierarchy of CA prestigious events, just behind the British Open and English singles championship.

Getting two players recognised at this level is a good reward for their consistency through the season and also for the club’s increased standing in national croquet.

The familiar Hamptworth Club, near Salisbury, will be hosting both Eights events side by side.

There was double cause for joy last weekend when both Roger Goldring and Raghu Iyer qualified for Golf Croquet All England handicap national finals.

Goldring will contest the Golf Croquet version of the All England for the second time and will return to battle the high winds of Ramsgate’s cliff top courts in September.

On the same day, club mate Iyer has qualified to become the first Phyllis Court player to play in the Association Croquet All England Handicap National Finals at Wrest Park near Bedford.

The Association game, which has much the longer history dating back to the 1860’s, has been in decline for some years at Phyllis Court, reflecting the national trend towards Golf Croquet.

But this season, Iyer has overseen a welcome return of interest in the Association Croquet game, and pleasingly most of the active players are also playing in outside tournaments, spreading the Phyllis Court name in that arena.

Iyer’s history-making appearance at the All England national finals is due reward for his efforts to breathe new life into the sometimes forgotten game.