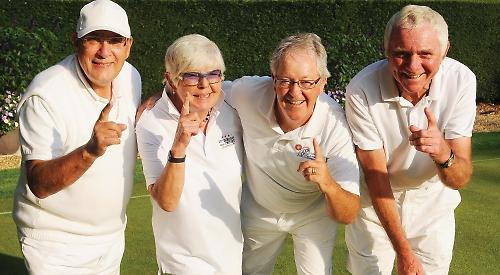 PHYLLIS COURT “A” wrapped-up only their second ever Southern Federation league title with victories in their last two fixtures last week.

Needing a good score against Blewbury on Wednesday to set up a title decider with main rivals High Wycombe on Friday, the Henley Club could not afford any slip-ups, but made their task harder when they dropped two matches in beating the former 5-2.

This left them needing an extra match win against High Wycombe rather than any victory margin being sufficient. Going into the decider, victory by any score for High Wycombe would have given them the title, a 4-3 win for Phyllis Court would hand it to Winchester and 5-2 or better would bring the title to Henley.

Phyllis Court got off to the best possible start with a morning which yielded three match wins. High Wycombe fielded three players with the same two handicap and so cunningly selected the strongest of the trio, Raouf Allim, at three where, because of the match format, he could contribute more to the result.

However, Helena Fensome foiled their plan with victory at the 13th hoop in her deciding game of three against Allim. That complemented Roger Goldring’s singles win and the doubles success of Phyllis Court 1 and 2 Chris Roberts and Ian Norris.

In the afternoon, Fensome wrapped-up her singles in straight games smartly which won the fixture for Phyllis Court and, soon afterwards, Norris’s match win secured the crucial fifth win that won the league. Goldring made it 6-0, again in straight games, and Roberts, who was cross to have lost his first game, won his match as well, to give Phyllis Court a flattering 7-0 scoreline, which was tough on the very competitive visitors.

Phyllis Court last won the league title in 2015 and the team fielded seven different players in this campaign and this league title is every bit down to those who were absent, David Hopkins, Carole Jackson and Frances Colman.