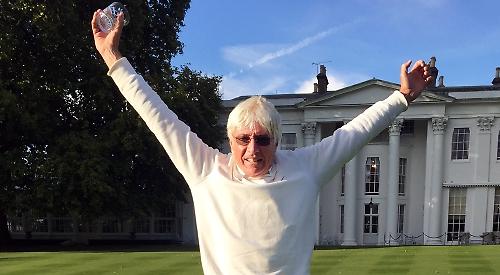 Club mate Frances Colman won this event last season and, although losing narrowly to Peperell this time round, she was pleased to see the title stay at her club.

Raghu Iyer made it a trio of Phyllis Court players at Hurlingham and he recovered well from early losses to string together a number of wins to record a strong finish.

On the national scene, there was disappointment for Chris Roberts but satisfaction for Roger Goldring at the Golf Croquet English National Singles Championship final last weekend at Nottingham.

Seventh seed Roberts lost all six of his games on Saturday, recovered to win everything on Sunday and won the plate event but ninth place overall was a less than satisfactory return for him.

The croquet season has been extended until late October at Phyllis Court due to popular demand, allowing a more relaxed approach to internal season-long competition finals which are all progressing to the final rounds.

Last week saw the staging of Phyllis Courts remaining two-day tournaments, which had been postponed from earlier in the season.

The rescheduling allowed at least one more player to qualify for the 80+ veterans tournament where top seed Raymond Wood won, but not without a fight from runner-up and last year’s winner Don Rutherford.

There was a surprise winner of the ladies’ tournament when Delia Norris made light of the five handicap steps difference between herself and top seed Helena Fensome.

Whilst Di Pascoe was wrapping up the secondary index points prize, the final round brought together undefeated Norris and Fensome in a deciding game. Norris established a good lead which Fensome struggled to close before gaining control of the pivotal hoop 11 with a great clearance to the boundary.

Norris’s strong return landed in the hoop and in attempting a jump shot to save the game, Fensome’s pushed Norris through to score the winner.