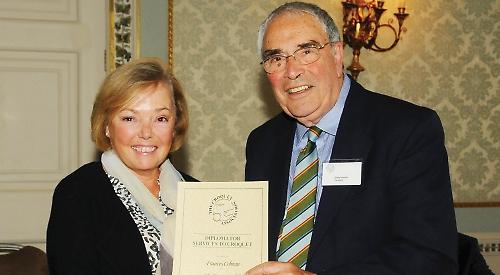 IT was quite a day for Phyllis Court’s Frances Colman at the very top of UK croquet on Saturday.

At the AGM of the Croquet Association (CA) in the morning, she was awarded the CA’s Diploma for Services to Croquet.

The award was known about in advance but she did not have an inkling of what was to come at the CA’s council meeting in the afternoon when the immediate past chairman of the CA, Tim King, proposed her to sit on the six-person management committee that effectively runs UK croquet.

The award citation that was read out by CA president Quiller Barrett told that Colman has been at the heart of croquet at her club for the last nine years, during which time it has transformed from a generally social croquet only club into one where a competitive element now runs through all levels of ability.

Her potential as a croquet organiser was spotted quickly and she was invited to serve on the club’s committee in only her second year in the sport, willingly accepting the golf croquet brief.

As well as organising beginners’ training that has seen well over half the club’s current 150-strong membership pass through introductory classes in her time, she quickly introduced GC handicaps for all members where previously there had been none and this then allowed competitive play in ability-based classed competition to be brought in.

By the start of her second year in the post, the number of season-long competitions had doubled, the first singles play one-day tournament had been introduced, and, thanks to her encouragement and enthusiasm for competitive play, members flocked to fill everything new that was offered.

More events have been added each year, including inventive ones like an Over-80s day and the four-yearly Phyllis Court Olympics, where national colours are worn, flags surround the courts and of course medals are presented.

Under Colman’s stewardship, competitive GC has blossomed, producing regular CA tournament circuit players and club teams that have reached inter-club competition semi-finals, and a final in which she captained the team.

Colman’s work has not stopped at her club, for she sits on the committee of the Southern Croquet Federation and is its representative on the CA council.

She is the Federation AC Handicapper, and she has the big job of GC Leagues Manager, where she has overseen the growth in events from one relatively poorly supported doubles-only league to three competitions boasting 30 entries.

She is a CA qualified coach at GC and AC, championship referee at GC, assistant referee at AC and an experienced tournament manager of club, federation and CA events.

It is, however, for her work at her club, Phyllis Court, that Frances Colman is nominated for this CA diploma, timed as it is to mark with her first 10 years in croquet.