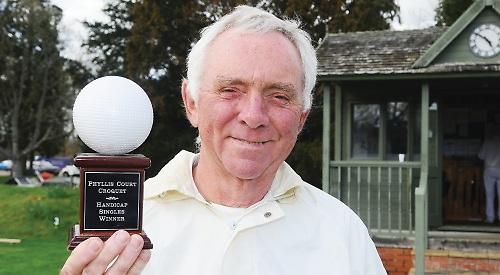 The nature of the Handicap Singles saw Norris concede extra turns to the entire field but, despite a close call against Tony Peperell, he came though the event unbeaten.

Norris faced Mike Fensome in his opening game and it was this victory that separated them at the end as Fensome remained unbeaten thereafter to finish in a clear second place after five rounds of the tournament’s pre-scheduled six.

With the rest of the field all taking games from each other, a halt was called when it became clear that Norris could not be overhauled in the planned sixth round.

Delia Norris, Roger Goldring, Colin Morgan and Dianne Browne all initially tied for third place and had to be separated by the “quality of wins”. This was important because the tournament is a qualifier for Phyllis Court’s four qualification places for the Area Final stage of the All England Handicap in August.