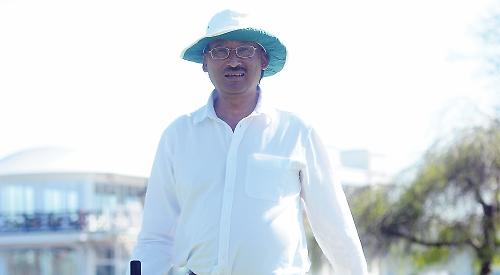 This was a first for a Phyllis Court player as Allim re-finds his form after a lengthy croquet career break.

Lady-luck was even handed with the playing schedule as Allim was granted a first round bye, only to come up against the eventual winner and main stay of the England World Championship team for the last 20 years, David Maugham.

Further west, Phyllis Court’s Chris Roberts put aside his golf croquet woe at Sidmouth the previous weekend, when his handicap slipped back to -1.

Roberts enjoyed better fortune at association croquet on a swift return to Devon, where he reduced his AC handicap to ‘scratch’ for the first time at the Budleigh Salterton May Week, where former Phyllis Court player Anthony Dix, now resident in Bournemouth, won Roberts’s senior class.

Also on the South Coast, and back with golf croquet, club mate Robin Coates put in a good performance on Saturday at Southwick, near Brighton, in the Sussex qualifier for the National B-Level Series (for players with 3+ handicaps). He won two games against an experienced field on his debut at this level and will be looking to build on this as he continues his development with further entries to B-Level Series tournaments around the country this summer.

Back in Henley, Phyllis Court were caught cold by High Wycombe in a golf croquet local friendly on Friday of last week, when the visitors raced into a 7-1 lead at the half way stage.

Pat Eades’s team stemmed the flow of losses and indeed halved the remaining games but the damage had been done and an 11-5 defeat was recorded.