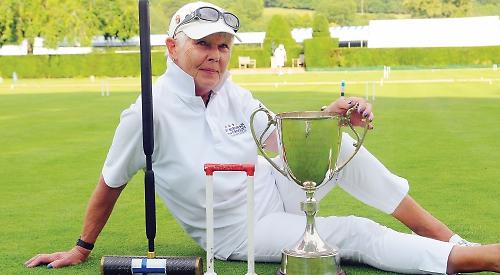 A THIRD straight league win for Phyllis Court’s top side at Littleton, near Winchester, last Friday, put them top of the Southern Federation Level League.

Despite making three enforced changes to their four-player team, the depth of talent at Phyllis Court still allowed the Henley team to field three players with handicaps of one or better.

There was an early scare in the morning doubles match between the two top players of each side, when Littleton took the first game of three and looked to have the match won in the second game with a scoring ball all but in final hoop.

Captain Roger Goldring and partner David Hopkins managed to rescue that situation, then wrapped up the deciding game and with Peter Haydon and A team debutant Robin Coates both winning their morning singles matches as Phyllis Court led 3-0 at lunch.

In the afternoon, Goldring secured the fixture-winning the fourth match win in quick-time.

Haydon also won his singles in a straight two games, Hopkins dropped the middle game of his match but won the decider and finally Littleton scored a consolation win when Gerry Wilde beat Coates in a match that also went to third game.

The unbeaten run of Phyllis Court C in the SCF Handicap League came to an end at Harwell on Monday. Raghu Iyer’s team welcomed back John Maguire after injury and gave a competitive team debut to the promising Bill Pitkeathly, who has impressed despite only having starting playing croquet in April. The C team were 3-1 down after the doubles and only won three of the eight singles games, so lost 8-4.

Eight women took part in this level play event which was sponsored by Rosie Richardson.

The closest game was just before the lunch break when holder Delia Norris beat Dianne Browne at the last hoop, thereby avoiding Fensome in the semi-finals.

Madeleine Probert did well to reach her first singles semi-final but then fell to Norris, and Fensome duly beat Browne to set up a repeat of last season’s final, but fortunes were reversed this time and Fensome took the game and title 7-4, becoming the first three-time winner of this event.