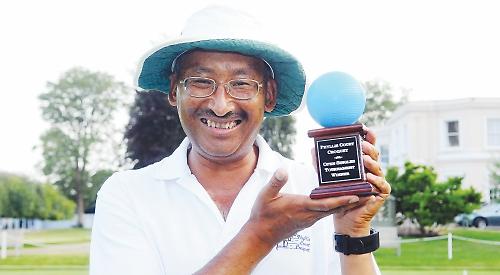 While Allim steadily amassed his string of wins, losing only once all day to top seed Chris Roberts, the player that caught the eye early on was Robin Coates, who scalped Roberts in the first round of games and repeated the feat twice more against Mike Fensome and Richard Peperell.

However, it was Allim who stood out with play that justified his handicap reduction earned in the National Inter-Club Championship match in Sussex the previous week.

The seven rounds ‘all play all’ format employed was punishing in the heat of the day, but by the end, Allim had a clear two game wins advantage over runner-up Roger Goldring and third placed Roberts.

Phyllis Court B travelled to Winchester for their latest SCF Handicap League fixture last week as their opponents Basingstoke.

The star of the day for Phyllis Court was Hugh Crook who won both his singles games, but with most of the other games being shared between the two sides a 6-6 draw that was recorded by the Henley side was not enough to lift them from the foot of the table.

The run of draws for Phyllis Court teams nearly continued on Monday when the Hurlingham Club visited Henley for an annual friendly golf croquet match.

A first round of level play doubles was halved and that set the pattern for the next three rounds of handicap and level play singles, each one of which could not separate the sides.

The hosts’ captain Colin Morgan was the only player undefeated all day and with good wins for Christine Searle, John Maguire and Tony Peperell along the way, it wasn’t until the fifth and last round that Phyllis Court got their noses ahead to record a 9-8 victory.