Probert has the edge to win singles crown 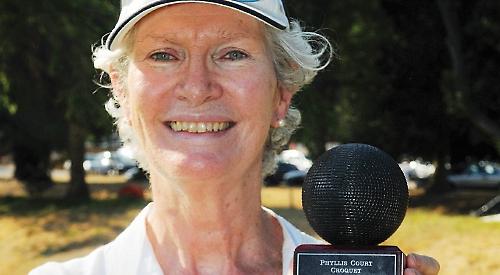 THE second edition of the golf croquet 8+ singles competition at Phyllis Court Club last week was won by Madeleine Probert.

Probert had been threatening to emerge from the ranks of potential improvers for some time and came to the attention with a good semi-final placing at the ladies’ singles last month.

Probert won five of her six games to tie at the top of the tournament field of 16 with Mike Christmas, where the tie-breaker gave her a career-first singles tournament victory.

A handicap reduction was earned for both Probert and Christmas, who together with Christine Searle, qualified for the Croquet Association’s national final for 8+ players, known as the Grass Roots Trophy at Bath CC on September 9.

Someone who is more used to tournament victories is Raymond Wood, who didn’t have everything entirely his own way, having to endure three close shaves at 7-6 before emerging with a perfect five out of five victory record to retain the Phyllis Court 80+ singles tournament title.

Six octogenarians took part on a cooler day and with the other players all taking wins against each other, this decided Wood as the winner even before the last round.

Ralph Chambers was a clear runner-up with three wins and the rest of the field all scored one or two.

The Phyllis Court summer AC handicap singles tournament was contested on the hottest day of the year last week and it ended with the decision to postpone the deciding game between Chris Roberts and Robin Coates to a later date. Two days later the tournament’s junior class was contested on a cooler day and this was a close affair over two shortened 18-point games between Mike Christmas and Edmund Shirley.

The latter won game one with a two-point margin, but Christmas controlled the second to win with an 11-point margin, so took the match with an aggregate points difference of +9.

Elsewhere Phyllis Court’s handicap league team need a win in the outstanding game of their singles match away at High Wycombe, in order to salvage a draw.

Chris Roberts lost quickly, Richard Peperell held out for much longer and only lost narrowly on time and the visitors’ only success came via captain Raghu Iyer.