Crook in fine form for Phyllis Court B side 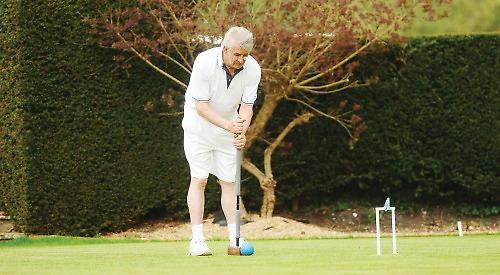 FOUR Phyllis Court players made up the entire Oxfordshire team at the GC Inter-Counties Championship and one other played for Berkshire.

Roger Goldring captained Oxon with Raouf Allim, Helena Fensome and Mike Fensome all enjoying wins over the two-day tournament for Division 2 of the Championship at Compton CC, Eastbourne.

Oxfordshire got off to a good start with 10 wins and only one loss by the mid-afternoon of the first day but then they tailed off to be on 11 wins and seven losses by the close of play.

It was a situation that they were to later rue when pipped for the second promotion place by Surrey in the last round of games on day two. Phyllis Court’s Richard Peperell was in the Berkshire team and his last hoop unexpected win against Helena Fensome was expensive for Oxon. However, Fensome bounced back to score a shock win of her own against the fast-improving Euan Burridge.

Glamorgan won the division to gain immediate promotion back to the top tier which they vacated last season, Surrey were second and just ahead of Oxon and Berkshire picked up the wooden spoon behind Worcestershire and a CA Select team.

Elsewhere Phyllis Court B recorded a first win in what was their last match of the season when they beat Harwell 7-5 under the stand-in captaincy of Hugh Crook, who impressively won both his doubles rubbers and both his singles.

Partnering Crook in the doubles successes was league debutant Tony Peperell who added a singles win of his own, with the team’s other wins coming from Colin Morgan and Ralph Chambers.

Phyllis Court C also won in the absence of their regular captain, and with Delia Norris taking the helm again, they thrashed Wingrave 9-3.

A Phyllis Court friendly team took to the field last week at High Wycombe and were led by Madeleine Probert for the first time.

The sides were level at 4-4 at lunch but the hosts pulled away in the afternoon to win 9-7.