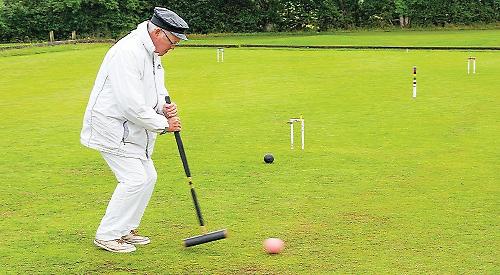 PHYLLIS Court Club in Henley had three players chosen to play in the second tier of the prestigious UK Selector’s Second Eight last weekend at Canterbury.

Chris Roberts was the club’s best performer when he qualified for the semi-finals, at the expense of clubmate Raouf Allim, by dint of one more game win when the latter lost his final game of the two-and-a-half-day round robin of three-game matches.

Roberts lost the first game of his semi-final by one hoop but was then beaten comfortably in the second game, so he finished joint-third in the tournament, two places higher than his seeding.

Consigned to the plate event, Allim won that event to consolidate a fifth-place finish in the tournament, in his first outing in the Eights.

Phyllis Court’s Roger Goldring was deserted by the good form that has seen him climb steadily up the UK ranking this season, but recovered to take second place in the plate behind Allim.

Meanwhile, the club hosted its first tournament for the Croquet Association when eight players from the region locked horns on Wednesday last week in the All England Handicap Area Final South.

Ian Norris and Mike Fensome both recorded six wins from their seven games, with the former getting the nod thanks to a greater net hoops tally.

However, Norris is unable to make the final due to a golf commitment and it is unclear who will be lucky beneficiary of his absence.

Also at Phyllis Court, Alim and Goldring paired up for the club’s open doubles tournament.

The pair were undefeated going into the final against Dianne Brown and Colin Morgan who sprang a surprise by beating second seeds Frances Colman and Roberts.

But with the light fading fast the final was postponed by mutual agreement.