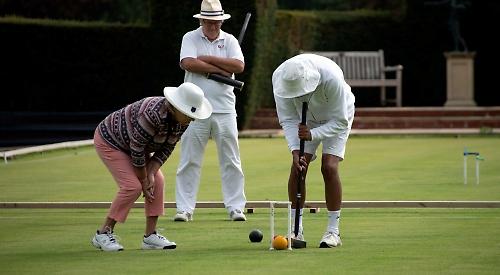 PHYLLIS Court Club in Henley have reached the national final of the GC Inter-Club Championship for the first time.

Their semi-final victory over Dulwich last week was undoubtedly the club’s greatest competitive achievement to date.

Top performer was Roger Goldring, who won both his morning and afternoon singles matches.

Goldring was the first on the score sheet with a two-game win over seasoned tournament player Andrew Dymond but Dulwich struck back smarty when their captain Simon Carter beat Helena Fensome also in straight games.

The first surprise came in the number one and two players’ doubles where Raouf Allim and Chris Roberts caught visitors Pierre Beaudry and Mark Daley cold with a confidence- building first game win and then followed that with some good fortune in the second game as patient play froze out their chasing opponents.

After lunch, Goldring was first home again, with a match-winning long shot from the boundary to score the decoding hoop 13.

Allim put early match nerves aside to take his singles to a third game decider with his international opponent Beaudry, and their encounter included some brilliant play from both players. But then great cheer went up from the other court as Fensome had recorded a crucial victory in her match against Dymond.

Roberts then won moments later and Allim’s deciding game was abandoned by mutual agreement with the result in the bag.

The National Final will be played on September 22 against Nottingham CC at a venue to be decided.

Allim and Goldring lost their morning doubles and Fensome also went down in her singles match, leaving only Roberts’s singles win to give hope for the afternoon session.

Goldring succumbed quite quickly and was followed soon after by Fensome at which point the fixture was lost before Roberts eventually won his second match and Allim turned up for the cup match with a great win against David Nicholson, who is ranked in the top 20 in the country.