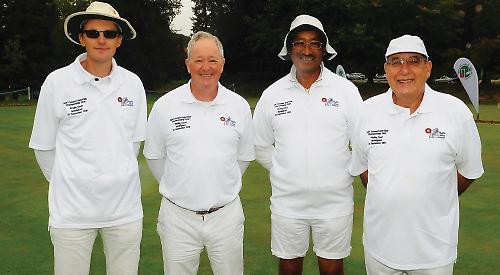 PHYLLIS COURT lost the Inter-Club Championship National Final on Saturday when Nottingham were just too good for the Henley side on the day, winning by five matches to two.

This was by far the most prestigious match played at Phyllis Court, featuring three internationals and the English champion, but was spoiled by the wet weather that kept an expected large crowd away.

The Phyllis Court team, in special shirts for the big day, gave good accounts of themselves but their best was not as good as their visitors and all the matches bar one went the way of the national rankings.

The closest contest was in the remaining morning singles where Chris Roberts took on 16-year-old rapid improver Euan Burridge, and won the first game at the 13th hoop.

Burridge came back well in the second and, after much tactical positional play, Roberts broke a deadlock to win the decider to give his side hope with the overall match score 2-1 to Nottingham at half-time. With four match wins needed for the title, it was all to play for in the afternoon singles.

In the number twos singles match Allim was first to finish when he lost to the new English singles champion Richard Bilton. Playing at number four Phyllis Court’s Roger Goldring was too cool for the more flamboyant young Burridge, and he won in straight games in the one match that went against the national rankings.

With the overall score then standing at 3-2 to Nottingham, the match was nearing crunch-time with the hosts’ von Schmieder and Roberts each one game down to Welsh international Ian Burridge and GB star Death respectively.

Fittingly it was Nottingham captain Burridge (senior) who, after a tussle at hoop 13, won his match to secure the title for the visitors. Roberts and Death halted their second game temporarily for the presentations, and soon after Death added another win for Nottingham to eventually win 5-2.

The presentation of the Inter-Club Championship Shield to Nottingham CC was made by the president of the croquet association Quiller Barrett.